Ukraine's Fatherland party left the ruling coalition of Prime Minister Arseniy Yatsenyuk only a day after his government survived a no-confidence vote. Party leader Yulia Tymoshenko urged other factions to exit as well. 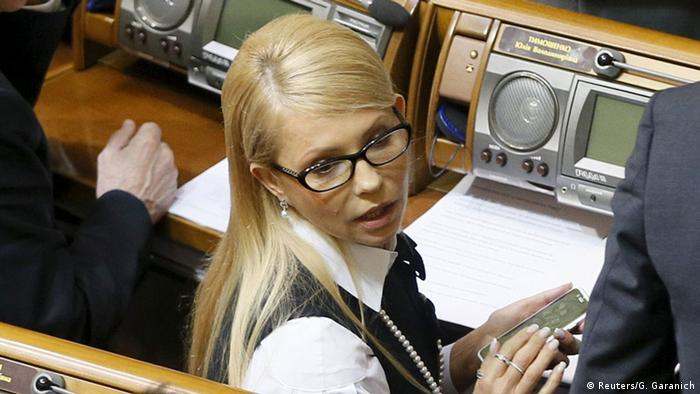 Leaving the ruling alliance was the "only possible step" for the Fatherland party, Tymoshenko told reporters on Wednesday, describing the Western-backed majority as a "facade."

"We are forced to acknowledge that there was never a pro-European, democratic coalition in this parliament," she said. "There existed only a shadowy, backroom coalition of political clans, which formed a government that ruled the country and led it to the final stage of destruction of our lives."

Even without Fatherland's 19 lawmakers, the government of Arseniy Yatsenyuk holds a three-seat majority in the 450-seat Kyiv parliament. However, cracks have long been visible among the other three parties in the governing coalition, and the prime minister's approval rating has occasionally dipped under 1 percent.

On Wednesday, Tymoshenko urged other factions to join hers and retract support due to slow reforms.

The Fatherland's leader served as a prime minister 2007 and 2010 and spent several years in prison on corruption charges under the previous pro-Russian government.

Rift between president and prime minister

On Tuesday, Ukrainian President Petro Poroshenko asked Yatsenyuk to step down, suggested a "total reformatting" of the cabinet, said the government had lost public support and committed "more mistakes than achievements." Poroshenko, who heads Ukraine's largest party, had joined with Yatsenyuk's party to form a coalition government.

The majority of lawmakers in Poroshenko's party voted against the prime minister in the no-confidence vote.

Yatsenyuk, however, has no clear successor, and many experts fear that the prime minister's resignation and early elections would push the country towards chaos.

Political instability has already derailed a crucial IMF aid program for the impoverished state, with the fraying ceasefire in the east and far-right protests in Kyiv adding to the pressure.

Economy Minister Aivaras Abromavicius has accused parts of the Ukrainian leadership of blocking systemic reforms in the country. "My team and I have no wish to be a cover for open corruption," he said after resigning. (03.02.2016)