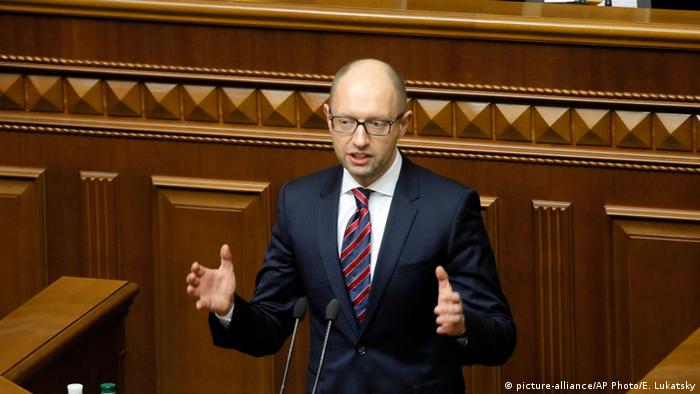 "In order to restore trust in the government, the president asked the prosecutor general and the prime minister to quit," presidential spokesman Svyatoslav Tsegolko tweeted on Tuesday.

"Is it not clear that successful reforms can only be conducted by a government that enjoys sufficiently high public support?" Poroshenko added in a statement on the presidential website. To restore trust, "therapy is no longer enough - you need surgery," he added.

The president said that all four parties that comprise Ukraine's current pro-Western coalition should take part "in a complete cabinet reshuffle."

Ukrainian lawmakers gathered enough signatures to hold a no-confidence vote on the government.

The president's party would vote to criticize the performance of Prime Minister Arseniy Yatsenyuk's government as "unsatisfactory", its parliamentary leader Yuriy Lutsenko announced. He also said his party wanted the no-confidence vote to take place later on Tuesday.

Maksym Burbak, the parliamentary leader of Yatsenyuk's party, told lawmakers that the consequences of voting against the government would be felt "literally the next day - since this could trigger early elections and chaos."

If Yatsenyuk falls, this would further delay negotiations with the International Monetary Fund (IMF) for the next tranche of money from the billion-dollar aid program for the crisis-ridden country. This tranche has been on hold since October because of the slow pace of reforms in Ukraine.

Last week, US Vice President Joe Biden urged the governing coalition in Ukraine to quickly establish unity to allow the country to "move forward with reforms, in line with the commitments in the IMF program."

Furthermore, the White House said Biden "expressed serious concern about the security situation in eastern Ukraine" in a call with Petro Poroshenko, as fighting went on. Since pro-Russian separatists rose up in Eastern Ukraine after Russia's annexation of Crimea in 2014, more than 9,000 people have been killed in the conflict.

The political crisis in Ukraine was intensified by the resignation of two top-officials in less than two weeks. Deputy Prosecutor General Vitaliy Kasko quit on Monday in protest over corruption.

"Today, the General Prosecutor's office is a brake on the reform of criminal justice, a hotbed of corruption, an instrument of political pressure, one of the key obstacles to the arrival of foreign investment in Ukraine," Deputy General Prosecutor Kasko said in a televised statement on Monday. 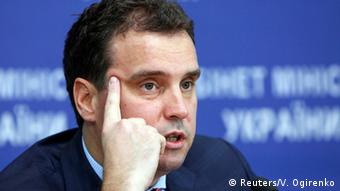 Economy Minister Abromavicius resigned at the beginning of February

His move followed the resignation of Economy Minister Aivaras Abromavicius, one of the key ministers in Yatsenyuk's government, on February 3, stating corruption and pressure from the president's party among his reasons. In an interview with DW, he called on Prime Minister Yatsenyuk to step down because the country was "caught in a crisis of trust". Radical steps were needed to regain that trust - such as a change of staff on the political level, he told DW. "A country can't implement successful reforms if the head of government has lousy ratings," he added.

Ukraine’s economy minister has announced his resignation, accusing the governing party of corruption. As Kyiv’s political power struggle continues, the West looks on with concern. (05.02.2016)

The Ukrainian president has urged Europe not to fall victim to Russian blackmail. Some in Germany view Moscow as essential to solving the refugee and Syrian crises. (03.02.2016)