The rear carriage on the roller coaster derailed, sending its occupants plummeting to the ground. The park has been closed pending an investigation. 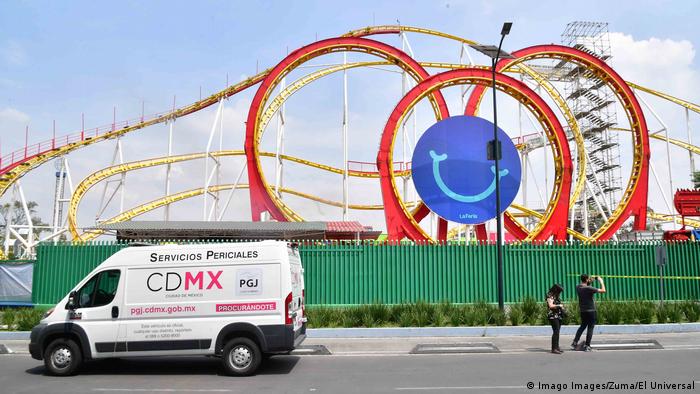 Two people were killed and two others injured when a roller coaster carriage derailed at an amusement park in Mexico City.

The governor's office said in a statement there was "an unfortunate accident" on the ride called Quimera.

The accident happened at the La Feria de Chapultepec amusement park in the capital on Saturday.

Initial reports suggested the last carriage came off the tracks and fell some 10 meters (30 feet) to the ground.

Local journalist Carlos Jimenez shared a video of the accident on Twitter.

Two men, aged 18 and 21, died. Two women were taken to the hospital with severe injuries.

The governor's office said the park would be closed pending an investigation and verification that the facility is safe.

The La Feria amusement park describes the Quimera as a triple-loop roller coaster ride that can reach up to 85 kilometers per hour.

"How long is 1 kilometer? And if we put 3 loops, do you dare?" the amusement park writes on its website.

The roller coaster was built by former German amusement ride manufacturer Anton Schwarzkopf in 1984. It spent 12 years in Germany before being sold several times and ending up in Mexico.

A rollercoaster carriage at a theme park in Southern Scotland has come off its rails and fallen onto a children's ride below. Police have reported injuries. (26.06.2016)

A boy was rushed to hospital after an accident at the German Fort Fun theme park cut his leg off at the calf. He was riding on a long, meandering mountain coaster. (08.10.2017)

An amusement park in southwestern Germany has had to shut down a new ride after people quickly noticed that it looked like a big spinning swastika. The "Adlerflug" ("Eagle's Flight") will now be redesigned. (20.08.2019)

Fans of amusement parks have a smorgasbord to choose from in Europe. Here are ten tips for parks that deserve a place at the very top of anyone's list. (12.09.2016)

Two roller coaster trains collided at a Legoland amusement park in southern Germany. None of the injuries are said to be life-threatening.