Indian authorities beefed up security in the tourist city following threats from an Islamist terror group. No injuries were reported in the two small explosions. 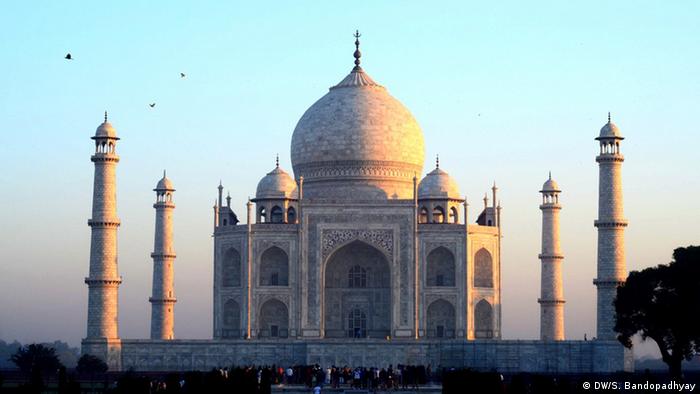 Just one day after a group aligned with the so-called "Islamic State" threatened to attack the Taj Mahal in Agra, two explosions struck the popular tourist city.

Two crude bombs exploded on Saturday - one near the Agra Cantonment Railway station and another on the rooftop of a nearby house.

"The blasts took place in the Shahganj area - one was at a garbage dump. No one was injured," deputy inspector general of police Mahesh Mishra said, news agency Deutsche Presse-Agentur reported.

"No terror angle has been established yet. Investigations are on," Mishra said.

Local users posted images of the attack on social media.

The previous evening a train driver narrowly avoided an accident when he saw a huge boulder on the tracks about 20 kilometers (12 miles) away from Saturday's blasts, national daily "Times of India" reported.

A note threatening terrorist attacks was found at the boulder, which due to emergency brakes only caused a minor collision.

India boosted security at the Taj Mahal after a pro-IS group warned of attacks in the country and threatened the Taj Mahal, police said Friday.

Images published in local media showed a fighter in combat fatigues and black headgear superimposed over a photo of India's biggest tourist attraction, and the words "new target" as the backdrop.

"There have been no specific intelligence inputs or any official alerts, but going by media reports we have stepped up security at the Taj," senior police superintendent Preetender Singh told Agence France-Presse on Friday.

"Security drills are being carried out on a six-hourly basis instead of the usual daily drill."

Earlier in March Indian Police killed an Islamic State supporter allegedly behind the bombing of a passenger train that injured eight people near Bhopal in the central Indian state of Madhya Pradesh.

Pakistan cracks down on group linked to 2008 Mumbai attacks

Pakistani authorities have put Hafiz Saeed, a firebrand cleric linked to the 2008 Mumbai terrorist attacks, under house arrest. Experts say this might be due to the pressure from the new US administration on Islamabad. (31.01.2017)

Who attacked UAE diplomats in Kandahar?

An Afghan official has accused Pakistan of aiding an attack in Kandahar, which was the first in the Afghan war targeting representatives from the Gulf region. Is this the beginning of a new dimension to the conflict? (11.01.2017)