Selecting from over 4 million objects, director Wes Anderson and his partner, illustrator Juman Malouf, have curated a unique, genre- and century-crossing exhibition at the Kunsthistorisches Museum Vienna.

"The Spitzmaus Mummy in a Coffin and Other Treasures from the Kunsthistorisches Museum" is a unique title for an exhibition. Then again, this is no ordinary show.

Opening on November 6, 2018, the palatial Kunsthistorisches Museum in Vienna — which houses one of the world's foremost fine arts collections — features 400 items chosen from its 14 collections of more than 4 million objects. Dating back as early as ancient Egypt and spanning more than 5,000 years, the items were hand-picked by American director Wes Anderson and his partner, the author and illustrator Juman Malouf.

Renowned for producing unusual movies with complex plots, Anderson has gained cult status for cultivating a highly stylized aesthetic — one which fans will nearly instantly recognize. Although Anderson himself has said his films are the product of collaborative efforts with the others on each project — "You cannot end up with the same thing if you change those names and keep mine" — there is a common thread tying Anderson's movies together: the look. 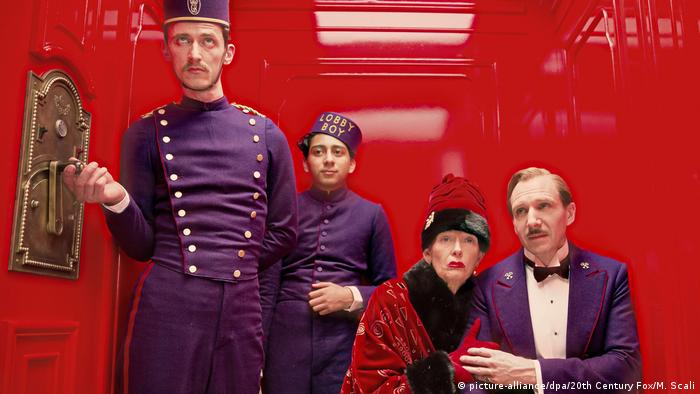 Colorful, nostalgic, original: Anderson claims to not have a unique aesthetic, yet his art is easily recognizable

While some critics have referred to the aesthetics of Anderson's work in a derogatory way, labeling it as "twee," the author Marc Spitz finds both Anderson and the idea of twee a good thing in contemporary society.

Writing in 2012, shortly after Anderson's film The Royal Tenenbaums was released, Spitz said that the twee "were souls with an almost incapacitating awareness of darkness, death and cruelty, who made the personal choice to focus on essential goodness and sweetness. They kept a tether to childhood and innocence and a tether to adulthood as is required by the politically and socially active."

That aesthetic — and the thread tethering the innocence of childhood with the political and social activism of adulthood — has come through in the curation led by Anderson and Malouf. As has a certain nostalgia, a glance back at the dynasties of bygone eras.

From a Qing Dynasty vase to a bugle belonging to the Austrian court wardrobe to an Indonesian actor's mask, the selection of objects cuts across centuries, medium and genre. The selection is a compendium of artifacts tied together in a manner only Anderson and Malouf could create.

Instead of displaying the objects by era or separating them by collection, the artists chose unusual placements — hanging a portrait of a seven-year-old falconer (Emperor Charles V) alongside one of a four-year-old dog owner (Emperor Ferdinand II). Anderson explains their selection process in the accompanying catalog as such, "We do harbor the humble aspiration that the unconventional groupings and arrangement of the works on display may influence the study of art and antiquity in minor, even trivial, but nevertheless detectable ways for many future generations to come."

"True: one of the Kunsthistorisches Museum's most senior curators (educated, of course, at the University of Heidelberg) at first failed to detect some of the, we thought, more blatant connections; and, even after we pointed most of them out, still questions their curatorial validity in, arguably, all instances. But, should our experiment fail on these levels, we are, nevertheless, confident it will, at the very least, serve the purpose of ruling out certain hypotheses, thereby advancing the methods of art history through the scientific process of trial-and-error. (In this case, error.)" 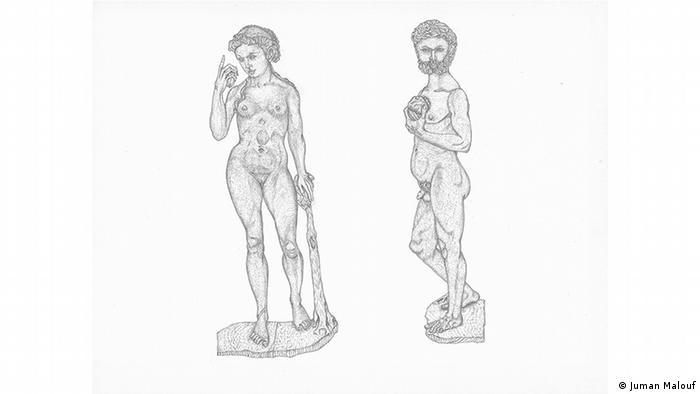 Malouf, a writer and illustrator, created sketches of several of the exhibits

An idea inspired by Warhol

One of the museum's curators, Jasper Sharp, worked closely with the guest curators while also allowing them freedom during the selection process. "Their approach was governed from the very beginning by intuition and excitement," Sharp writes in the exhibition catalog.

Noting the historical significance of the museum galleries in which the objects are presented, he writes, "it feels entirely appropriate that the exhibition is being presented within the rooms of the Kunstkammer, in whose origins we can find the very earliest strategies of display, systems of order and organization, and play of relationships between objects."

The idea for the guest curatorship, he goes on to say, was not his own but was inspired instead by Andy Warhol's work across three museums in 1969-1970, which resulted in the exhibition "Raid the Icebox I with Andy Warhol."

Invited by Jean and Dominique de Menil to draw from the collections of the Rhode Island School of Design, Warhol selected items from the museum's storage as an experiment that responded to de Menil's questions: "What would happen if some important contemporary artist were to choose an exhibition from the reserves? If the only organizing principle would be whether or not he liked whatever he saw? Would the result be different from having a storage show chosen by a curator? Or by anyone? If the artist who selected the materials were strong enough, would he impose his personality on the objects? And If he were famous enough, would it not oblige the curious to look?"

The answers Warhol provided both in his selection and in his methods for presentation, Sharp writes, "were provocative and unconventional, assaulting the principles of connoisseurship and established institutional yardsticks for considering the relative value of objects."

While Warhol's answers have continued to inspire museum directors even today, the questions are being posed anew with each guest curatorship.

Whether the twee universe of Wes Anderson and Juman Malouf will oblige the curious to look will be seen in the number of visitors to the Viennese Museum to see the exhibition, which will move to the Fondazione Prada in Milan in October 2019.

Wes Anderson's "Isle of Dogs," a stop-motion adventure featuring the director's ultra-stylized approach, premiered at the Berlinale to strong reviews. Now the political allegory is making its American debut. (23.03.2018)

Selecting from over four million objects in the Kunsthistorische Museum Vienna's catalog, director Wes Anderson and his partner, illustrator Juman Malouf, have curated a unique, genre- and century-crossing exhibition. (06.11.2018)