Tusk sings EU′s praises as he accepts Charlemagne Prize | Europe| News and current affairs from around the continent | DW | 13.05.2010

Polish Prime Minister Donald Tusk is this year's winner of the Charlemagne Prize. The prestigious European prize is awarded annually in Aachen for promoting European understanding. 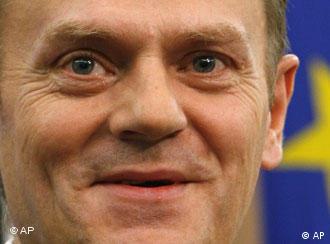 Tusk receives the prize in its 60th year

Polish Prime Minister Donald Tusk, 53, received the Charlemagne prize in recognition of his efforts in furthering European understanding and cooperation and bringing Poland into the heart of Europe. He accepted the award at a ceremony in the city of Aachen on Thursday.

The Charlemagne judges praised Tusk for steering his country away from nationalism, describing him as a "patriot and a great European at the same time."

From his first moments as prime minister, Tusk established that his priorities lay with Europe. In 2007, when asked where his first foreign trip would be as premier, Tusk did not hesitate before naming Brussels.

"However, we are in the European Union so I wonder if my visit to Brussels is a foreign trip at all," he added.

Talking to Deutsche Welle in Aachen while he was there to accept the award, Tusk accentuated his loyalty to the concept of Europe. Fealty to the union is especially crucial in difficult times, such as during Greece's recent financial crisis, he said.

"The more difficult, the more painful the experience, the more people who doubt us from without, the more we have to hold the flag of Europe high and cry out loudly that the European Union is a phenomenal concept," Tusk told Deutsche Welle.

He said Europe needs to stay true to its ideals of freedom, and called for more integration - even as he looked toward further EU expansion. States seeking accession, such as Turkey and Ukraine, should be asked whether they share European values, and if they want to be part of a society "where everyone stands up for their neighbor, and where solidarity and freedom are more than just empty words."

Poland is set to take on the rotating EU presidency next year. Tusk sees key issues that year as being energy security, defense, and "intelligent policies" when it comes to dealing with the EU's eastern neighbors. 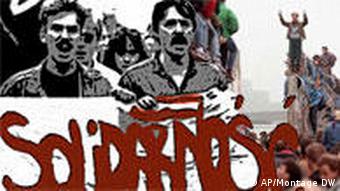 As a student, Tusk was involved in the Solidarity movement

Part of Tusk's powerfully pro-European outlook may be due to his home city of Gdansk. The city has a European and international character and has played a key role in many pivotal events of the 20th century. It was in Gdansk where World War II started, it was also the scene of a massacre of protesting workers by the Communists in 1970, and the place where the trade union Solidarity set in motion events leading to the fall of the Iron Curtain.

As a young history student Tusk became involved in the Solidarity trade union. Solidarity was a broad anti-Communist social movement which had several million members. The movement was crushed by the then-premier of the People's Republic of Poland, Wojciech Jaruzelski, who imposed martial law on Poland in 1981.

In 1989, when the Berlin Wall fell, Tusk was delighted: "We Poles had tears in our eyes. We felt a great satisfaction in what Solidarity had started and then to see this great finale in other European capitals," he said.

After the Iron Curtain

The fall of the Berlin Wall and the Iron Curtain was a symbolic fresh start for political life in Poland. In 1989, Tusk entered parliament for the first time. His aims were to promote democracy and the free market. 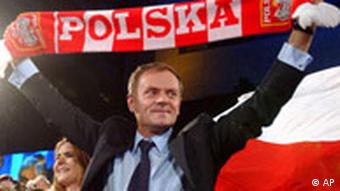 Tusk celebrates the victory of his Civic Platform party in 2007

The 1990s were a politically turbulent decade, but in 2001, Tusk emerged to form his own political party, Civic Platform (PO), which was pro-European and had its ideological roots in conservative liberalism.

Speaking on the night of the election, Tusk stressed the importance of freedom: "We will ensure that those in power take every care to make sure the Poles remain proud and free among the people of Europe," he said. 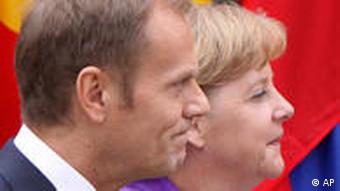 Poland's ties with Germany have improved since he became prime minister

Differences remain over plans to build a Baltic Sea pipeline to transport gas to Germany from Russia, and over Germans displaced during World War II. But during Tusk's time in office, Poland and Germany have been working to find pragmatic solutions to their disputes.

Polish relations with Russia under Tusk have also seen vast improvement. This was in evidence when Vladimir Putin attended ceremonies commemorating the 70th anniversary of the invasion of Poland and a memorial service to those murdered in Katyn. Ties have grown even closer since the plane crash in Smolensk, in which the then Polish president, Lech Kaczynski, died.

About that crash, Tusk told Deutsche Welle that the tragedy "broke the hearts of Poland, but not the stability of the state."

His comments to DW aside, Tusk is not a big talker. He comes across as a thoughtful politician who doesn't look for a fight. His conciliatory tone makes him one of the most popular politicians in Poland. It also serves him well in Brussels.

Since 2007, Poland has once again become a welcome and constructive partner country. Despite his quiet nature, Tusk was a vocal advocate of the ratification of the EU's Lisbon Treaty.

Previous winners of the Charlemagne Prize have included Chancellor Angela Merkel in 2008 and former US President Bill Clinton in 2000.

Polish Prime Minister Donald Tusk has been awarded the Charlemagne Prize, one of Germany's top public service awards, for his commitment to European unification. (16.01.2010)

Andrea Riccardi, a Catholic layman who founded the Sant'Egidio Community in Rome, has been awarded the prestigious Charlemagne Prize at a ceremony in Germany. (21.05.2009)