If you're puzzled by what is considered a work of art, you're not the only one. Even art critics wonder about the four shortlisted nominees for the prestigious Turner Prize, which will be given out on December 7. 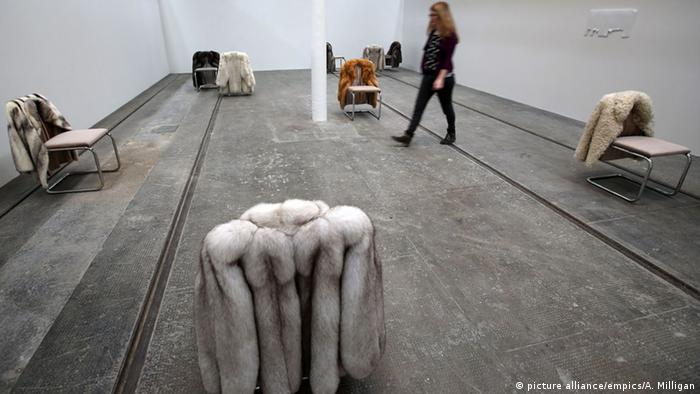 "The bar is low. The hopes are small. The expectations are pitiful," writes "The Guardian" of this year's selection for the Turner Prize, wondering why "a mediocre project, two music installations and some wonderful work - by architects" were selected as this year's cream of the crop in the art world.

The Turner Prize is widely considered Europe's most prestigious visual art award in Europe. Every year, it celebrates the works of artists under 50 who have held "an outstanding exhibition" in Britain during the previous 12 months. The winner is also given a cash prize of 25,000 pounds (35,600 euros, $37,750) and the finalists obtain 5,000 pounds.

Since its creation in 1984, the Turner Prize has been proudly sparking controversy. The British Culture Minister Kim Howells once said the award was for "cold, mechanical, conceptual bullshit," and Prince Charles agreed.

If the British establishment does not get it, then it must be art.

In 1995, Damien Hirst won the award by encasing two dead bisected cows in formaldehyde, shocking the public. In 1998, Chris Ofili obtained the prize for an ultra-traditional painting - using elephant dung.

In many other cases, the winning artwork shocks by its strange simplicity, such as Mark Wallinger's 154-minute film of himself walking around a German gallery wearing a bear suit, which earned him the award in 2007.

Will this year's winner create a similar outcry? "I think those days when people were out to be shocked and to shock are not where artists really are at the moment," Sarah Munro, director of the Glasgow arts space Tramway, told Reuters. 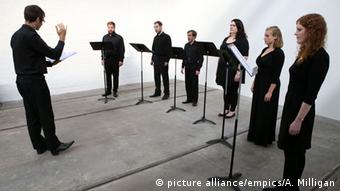 A performance of the operatic work DOUG Janice Kerbel

Even though the 2015 finalists are not the ultimate provocateurs, this year's selection still confounds many, not just the establishment. Is it broadening the definition of art or are the Turner judges neglecting the truly interesting artists working in Britain through their selection?

Just put your coat on the chair

The works of the four finalists are on show at the Tramway arts space in Scotland until January 17.

In the first hall of the exhibition is the installation of the London-based German artist Nicole Wermers, nominated for a show called "Infrastruktur" (Infrastructure) she held at a gallery in London.

Her main installation is, basically, 10 chairs covered by fur coats.

In the short video "TateShots," the artist explains how she was inspired by the "fleeting observation that you can make in a café or restaurant, where somebody puts their jacket on the back of their chair in order to claim that little bit of public space."

Wermers' fascination for the concepts of public and private space is also reflected in the series of small ceramic sculptures reproducing ads people typically hang on the streets, from which phone numbers can be torn off.

These two pieces both show common social gestures turned into a rigid sculptural form by the artist, explains the co-curator of the exhibition, Paul Pieroni, according to AFP. This work "is the most conventional part of the exhibition; they are sculptural objects in the traditional sense," he admits. 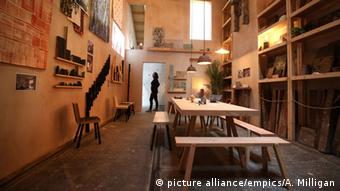 A glimpse into Assemble's refurbishing project

Moving on from "conventional" sculptures to a more occult installation, the next room of the Turner Prize exhibition is dedicated to the British artist Bonnie Camplin's "supernatural study center."

Her installation includes five televisions where people can listen to the testimonies of people who share their paranormal experiences. The artist added documentation around the room to allow visitors to decide for themselves if these stories are true.

Camplin was selected for her show called "The Military Industrial Complex," where she questioned the concept of "consensus reality" and how it is formed, "drawing from physics to philosophy, psychology, witchcraft, quantum theory and warfare."

Her project pushes "the limit of what we might say is real or unreal, believable or unbelievable," Pieroni said.

The 45-year-old Canadian artist Janice Kerbel is also among those shortlisted for a truly immaterial work - an enigmatic musical composition called "DOUG."

Kerbel's piece takes the form of nine songs representing physical accidents, to be performed by six opera singers. All dressed in black, the performers give shape to the series of disasters that happened to the main protagonist, Doug. 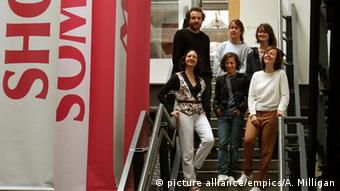 Through this work, the artist aimed to translate the concept of "accident" into a musical form.

Some songs or the entire composition are performed every day of the exhibition.

The final part of the exhibition explores the designs and ideas of Assemble, a self-organized collective of about 15 members, who have attracted the attention of the Turner Prize through their community work, helping local residents in a district of Liverpool refurbish their houses and keep them affordable after a long battle against demolition.

As their locally-designed architecture could not be transferred to the exhibition halls of the Tramway in Scotland, Assemble set up a special installation for the Turner Prize, which demonstrates well the ingenuity of their work.

The collective was very surprised to be nominated for the award, as they rather see themselves as architects and designers rather than part of the art world. The grass-roots recyclers would nevertheless know how to wisely invest the cash prize if they turned out to be the winners.

To justify this unexpected nomination, Alistair Hudson, one of the judges of the Turner Prize, simply said: "In an age when anything can be art, why not have a housing estate?"

This year's award ceremony will be held at the Tramway in Glasgow, on December 7.

They criticize power structures and consumerism or underline the strength of communities: Which of these nominated works of contemporary art will receive the prominent award this year? (12.05.2015)