They criticize power structures and consumerism or underline the strength of communities: Which of these nominated works of contemporary art will receive the prominent award this year? 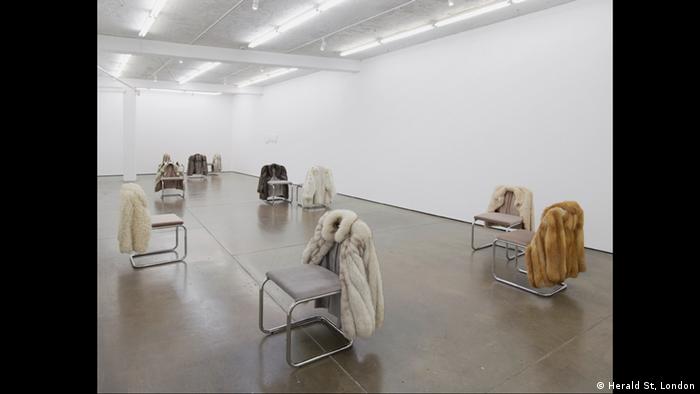 The Tate Museum, which runs what is considered one of the most prestigious awards in the art world, revealed on Tuesday (12.05.2015) in Glasgow the four works shortlisted for this year's Turner Prize.

Nicole Wermers, a German artist based in London, was nominated for her installation "Infrastruktur," which features chairs and fur coats. In a press statement, the Tate jury praised the fact that the work explored "the appropriation of art and design within consumer culture."

The Londoner Bonnie Camplin was also nominated for her work, "The Military Industrial Complex," which expresses through film, drawing, music, and writing a "critique of existing power structures," according to the Tate panel.

The arts collective Assemble was selected for a design and architecture project which involved the residents of a rundown area of Liverpool. The Tate underlined how the collective's "architectural spaces and environments promote direct action and embrace a DIY sensibility."

Janice Kerbel, born in Canada but working in London, also made it to the shortlist with her operatic work "DOUG," a performance piece of nine songs for six voices.

The winner will be announced in December and will receive a cash prize of 25,000 pounds ($40,000). An award of 5,000 pound goes to each of the other shortlisted artists. The prize is restricted to artists under age 50 working in Britain and honors a work shown publicly during the previous year.

The Turner Prize was created in 1984 and has already been awarded to Damien Hirst, Anish Kapoor, and Gilbert and George. As it rarely recognizes traditional painters or sculptors, the British tabloid press regularly ridicules the rather obscure art preferred by the institution.

Wolfgang Beltracchi, the "forger of the century," created chaos in the art market with his fake paintings - and hundreds are still circulating. The "Robin Hood of art" is now using his own name to sell expensive works. (07.05.2015)