In light of last week's attempted coup, Turkish President Recep Tayyip Erdogan has announced a three-month state of emergency. He insisted that the measure does not represent any threat to the country's democratic order. 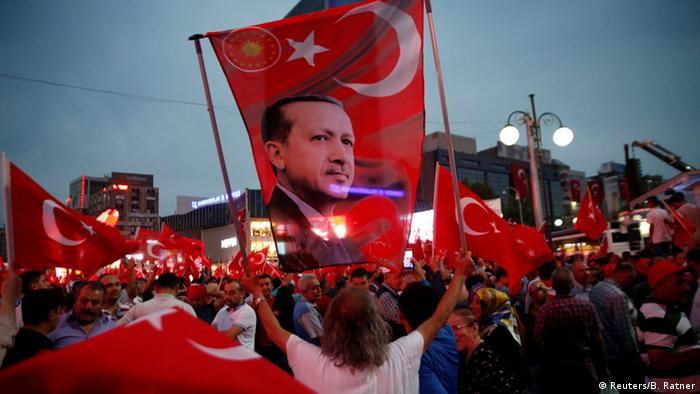 In a televised broadcast shortly after National Security Council and Cabinet meetings in Ankara on Wednesday, Turkish President Recep Tayyip Erdogan said the three-month state of emergency was necessary "in order to remove swiftly all the elements of the terrorist organization involved in the coup attempt."

The state of emergency will come into force after parliament approves the decision, with a special sitting expected in the near future.

Once in effect, it will allow the president and Cabinet to bypass parliament in passing new laws and limit or suspend rights and freedoms when deemed necessary.

'In no way against democracy'

According to Article 120 of the Turkish constitution, the conditions required for such a
move are "widespread acts of violence and destruction against the free democratic order" or "a grave collapse of public order."

The Cabinet can declare the state of emergency nationwide or in parts of the country, for a maximum of six months, which can later be renewed.

"This measure is in no way against democracy, the law and freedoms," Erdogan said on Wednesday. "On the contrary, it aims to protect and strengthen them."

"As the commander in chief, I will also ensure that all the viruses within the armed forces will be cleansed," he added.

Erdogan had earlier suggested in an interview with the Al-Jazeera TV network that the coup plotters might still be active in the coming weeks. "I don't think we have come to the end of it yet," he said.

The Turkish president said the pro-government death toll in Friday's failed coup was 246 and that at least 24 coup plotters had also been killed.

Shortly have the announcement on Wednesday, Turkish Prime Minister Binali Yildirim said on Twitter that the state of emergency was not aimed at "daily lives" but at "rapid functioning" of state mechanisms.

His deputy, Mehmet Simsek, shared a similar message, saying that the state of emergency would not curtail basic freedoms.

"It isn't martial law of the 1990s," he wrote in a series of Twitter posts. "We're committed to market economy," Simsek said. "It won't be any different from those imposed by our European partners."

Hours before Erdogan declared the state of emergency on Wednesday, ratings agency Standard & Poor's downgraded Turkey's credit rating to "junk" status - citing the failed coup and political turmoil for the decision. Erdogan, however, insisted the downgrade "does not reflect the realities of the Turkish economy."

The international community has already raised concerns that Erdogan's ongoing purge of key areas of public life in Turkey will hit the economy and worsen already fraught international relations, in particular with Turkey's EU and NATO partners.

The purge of the military and police was widened earlier on Wednesday to include thousands more within the nation's education sector. 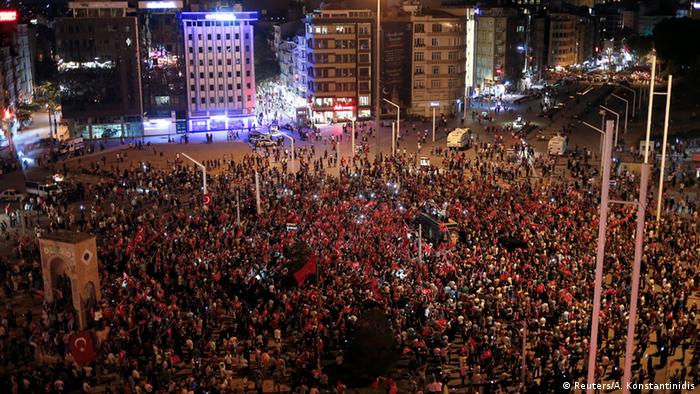 Many supporters of Erdogan have protested in the streets, calling for the return of the death penalty

Since Friday, some 29,000 government employees have been suspended, including more than 6,300 soldiers and 3,000 members of the judiciary.

The German Foreign Ministry urged Turkey on Thursday to end the state of emergency as soon as possible, adding that by rule of law, proportionality must be maintained in Ankara's response to last week's attempted coup.

Bringing back the death penalty?

Supporters of US-based cleric Fethullah Gulen have been accused by Ankara of leading Friday's attempted coup and acting as a terror group.

Gulen, who has lived in US-exile since 1999 and heads what he terms the "Gulen Movement," denies the charge.

Since the failed coup, many protesters have taken to the streets in support of Erdogan and demanded the restoration of the death penalty.

Erdogan said that if parliament approves capital punishment, he would back the move - 12 years after the death penalty was abolished in Turkey.