After using social media to publicly quash the coup, Turkey's government is cracking down on news sites and purging state institutions again. Here is how censorship works in the country - and how Turks react to it. 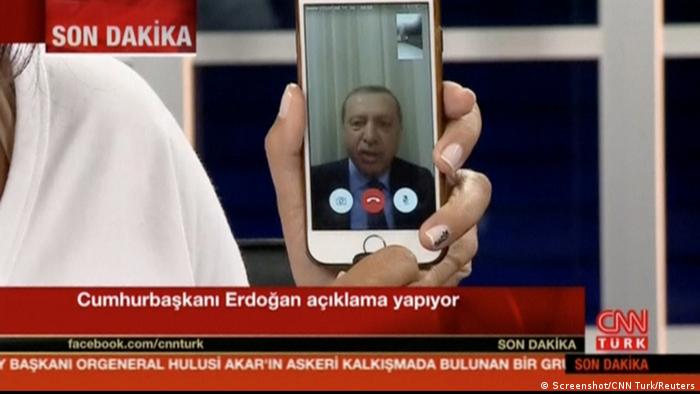 After recent terrorist attacks, Turkey's authorities have generally been restricting access to the most important social media platforms through throttling. An organization called Turkey Blocks has been monitoring this closely over eight different crises including the terrorist attacks that have occurred since September 2015. Turkey Blocks says that these restrictions can be observed for an average of 12 to 14 hours following a crisis.

After the coup attempt, the social media block was also observed:

"We were hearing the jets here in Istanbul and monitoring at the same time. It was pretty crazy," Alp Toker, initiator and coordinator of Turkey Blocks, told DW.

However, this time, the block was way shorter than usual - a little less than two hours, according to Toker.

As soon as the restrictions were lifted, Turkish President Recep Tayyip Erdogan launched a social media blitz, sending a call to the population via different platforms, Facebook, WhatsApp, directly to their mobile phones, and through Twitter.

This tweet, asking the population to go out to airports and public squares to resist the coup, went out to his over eight million followers:

Erdogan also contacted the TV station CNN Turk through the video chat app FaceTime. The president was shown sitting in front of a simple curtain on the chat screen of an iPhone in the hand of the news host, Hande Firat: "First my hands were shaking," she told the German newspaper "Bild." 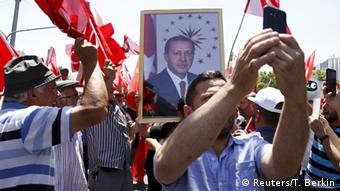 "That was extraordinary," said Alp Toker. "He usually likes his appearances to be very formal." The improvised setting added to the sense of emergency, all while creating "another milestone in digital messaging's growing influence in shaping world events," wrote "The Globe and Mail" media reporter James Bradshaw.

"I have to congratulate their promptness that night. That's probably the quickest response the government issued to anything you can imagine," Istanbul-based social media strategist Serdar Paktin told DW.

As thousands of Erdogan supporters answered the call, they made their own use of social media. "There were remarkable Periscope live stream videos showing the extent of the damage. That influenced more people to take to the streets," said Toker.

How Turks react to the blocks

The Turkish president is renowned for condemning social media when he fears that it could serve the purposes of protestors. Back in 2013, during the Gezi Park protests, Erdogan called Twitter "the worst menace to society."

However, the Turkish president joined the platform himself in 2009 and uses it regularly - or at least, his communication team does. Erdogan himself has always declared he doesn't have a Twitter account, according to Paktin.

The Turkish president has the same contradictory approach with Facebook. Yet Turks are "so used to these double standards that no one complains anymore," said Saka.

"Turkey is a country of paradox, dilemma and oxymoron," added Paktin.

Internet users in Turkey know how to circumvent the blocks using VPNs - virtual private networks - or software allowing people to surf the net anonymously, such as Tor. "Most of the Turks are quite knowledgeable," explained Saka. He noticed that ordinary people have already started using Telegram, or Signal, which is an encrypted voice messaging service that was recommended by Edward Snowden, instead of WhatsApp.

This is what internet restrictions in Turkey look like

However, a large part of the Turkish population has not bothered finding alternative ways to access those sites, explains Toker. Many tourists looking for information on Friday night didn't know how to circumvent the blocks either. In such cases, this is what restricted access looks like:

Turkey Blocks was the first organization to prove through concrete data that there is a form of throttling going on.

Their monitoring has also demonstrated that YouTube was added to the list of restricted sites only last month: It was down after the terrorist attack on Istanbul's Ataturk Airport in June. "It's a new shift in their policy," said Toker, adding that YouTube videos following the terror attacks in Ankara in March might have influenced this decision.

Toker also said that these blocks are "not centrally controlled, NSA-style." Although these directives are given by the country's Telecommunications Directorate, TiB, each internet service implements these restrictions individually, he explained.

After the attempted coup, the government appears to be further cracking down on freedom of expression. TiB has blocked access to some 20 Turkish websites, according to different sources. Once again, alternatives allow many Turks to access to these sites, but the drop in readership can "affect the advertising income of these sites," Saka pointed out. 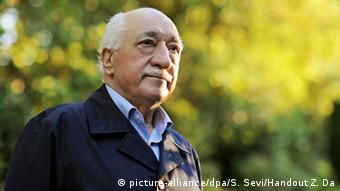 Most notably, even though the websites were accused of being supporters of Fethullah Gulen, "They were not. Actually, one of them was a hardcore anti-Gulen news outlet," said Paktin. Fethullah Gulen's religious movement is blamed by the government for the failed coup.

Distressing news keeps breaking since the failed coup. On Tuesday, the country's broadcasting regulator canceled licenses for all radio and television stations linked to Gulen's movement.

Turkey's Board of Higher Education also ordered all 1,577 university deans nationwide to resign on Tuesday afternoon. A professor in Istanbul who had first agreed to contribute to this article told DW she no longer could, as she was stuck in a series of emergency meetings.

Saka has also noticed that several Turkish Twitter users have switched their accounts to private since Friday, even though some of them already have several thousand followers. With the post-coup purges and Erdogan's threats to reinstate the death penalty, "People are scared. They are self-censuring themselves," he says.

At least two people have reportedly been arrested for social media posts insulting Erdogan, with one allegedly praising the coup.

"People feel forced to make a choice between the military or the AKP. If you don't, you're labeled. This is increasing polarization," said Saka.

WikiLeaks has said it verified the material, which dates from 2010 to July 6, 2016. The media organization, whose slogan is "We open governments," said Monday that its structure was under sustained attack, but posted just before the release of the documents, "We appear to have won our 24h cyberwar."

Observers say that with the current purge in Turkey, it might be difficult to find enough Turkish analysts willing to sift through this information and publically write about it.

Turkish author Burhan Sönmez: 'Our society should not be left to anti-democratic politics'

Turkish human rights activist, journalist and novelist Burhan Sönmez has been tortured by the police, but stays committed to freedom of expression. He tells DW why he is hopeful for his country after the attempted coup. (18.07.2016)