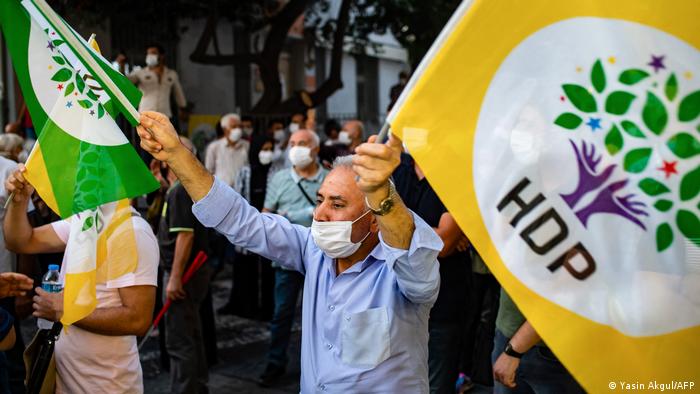 The HDP is one of Turkey's larger political parties

Altogether, representatives from the HDP said at least 36 party members were detained over suspected links to militants from the outlawed Kurdistan Workers' Party (PKK).

Separately, the Ankara chief public prosecutor issued 12 arrest warrants for other suspects over their alleged ties to the PKK.

Turkey's state-owned Anadolu news agency said Friday that police had arrested at least 10 of those sought.

Police also detained 15 more suspects accused of making social media propaganda for the PKK in the southern province of Adana.

The actions come only two days after a Turkish court began hearings over banning the leftist opposition HDP.

The indictment before the Constitutional Court to dissolve the HDP seeks to ban 687 party members from engaging in politics for five years.

The court took the first step in this direction on Friday with the appointment of a rapporteur to conduct the investigation and prepare a report for the court's 15 judges.

It is the latest in a series of crackdowns on the HDP  since 2016 during which a majority of its elected mayors have been dismissed and replaced by government-appointed trustees.

Turkish President Erdogan thinks US should stand with Turkey, not "with the terrorists"

In further police action, Ozturk Turkdogan, head of the Ankara-based Human Rights Association (IHD), was also detained and his house in the city was raided, the organization said.

"Our lawyers are trying to obtain information about this case. His arrest is a blatant human rights violation. He must be released now," the IHD tweeted.

Earlier this month, President Erdogan unveiled a "human rights action plan" saying that Ankara would strengthen the right to a fair trial and the right of freedom of expression.

Critics, however, say the plan fails to address an erosion of human rights in the country.

PKK considered terrorists, but HDP only by Turkey

Designated a terrorist organization by Ankara, the US and the European Union, the PKK has waged an insurgency in Turkey since 1984 in which more than 40,000 have been killed.

Since a ceasefire with them ended in 2015, Turkey's President Erdogan has taken an increasingly harder line against both the PKK and the HDP. Ethnic Kurds make up some 20% of the country's 84 million population.