Turkish parliamentarians have approved changes to a law giving the government more control over the judiciary. A brawl during the marathon debate on the legislation saw two lawmakers injured. 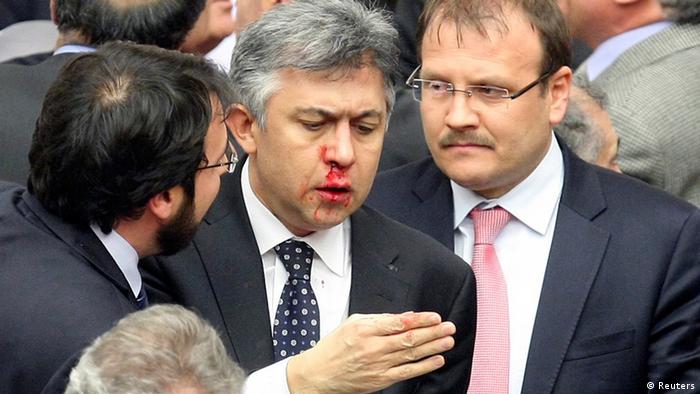 The Turkish parliament on Saturday approved reforms to a contentious bill giving the government more control over the judiciary. During a tense all-night debate two lawmakers were injured in a fist fight.

Ali Ihsan Kokturk (pictured above, c.), a lawmaker from the main opposition Republican People's party (CHP), was taken to hospital with a broken nose, while Bayram Ozcelik from the ruling Justice and Development Party (AKP) had his finger broken.

The law change will give the justice ministry greater control over the Supreme Board of Judges and Prosecutors (HSYK), an independent body in charge of appointing and promoting judges and prosecutors.

It would change the make-up of the HSYK and give the justice minister the right to launch investigations into its members.

The bill had been hotly contested by opposition parties, who claim the reform is a bid by the government to limit fallout from a corruption investigation that has affected top allies of Prime Minister Recep Tayyip Erdogan.

The international community has also warned that Turkey's law change threatens the independence of its judiciary.

Top European Union officials had voiced concern over the measure during a Brussels visit by Erdogan in January.

They warned Turkey, which aspires to join the EU, that it must comply with the bloc's democratic principles.

The bill must still be sent to President Abdullah Gul for approval. Opposition parties say they will challenge the law at Turkey's constitutional court before he signs it into force.

The reforms come as Turkey remains in political turmoil over a corruption scandal that Erdogan has called a conspiracy against his government by his political rivals, including US-exiled cleric Fethullah Gulen.

So far, 24 people, including the sons of three cabinet ministers, the CEO of state-run Halkbank and businessmen linked to Erdogan.

Erdogan claims the police and judiciary are trying to undermine his 11-year rule and has retaliated by sacking hundreds of police and prosecutors.

Last week, Turkey triggered protest at home and abroad after its parliament approved restrictions to the internet seen by government critics as an attempt to prevent evidence of official corruption being leaked online.