Yavuz Selim Demirag has been an outspoken critic of President Erdogan. He was set on by assailants with baseball bats in what journalists say is a sign of shrinking press freedom. 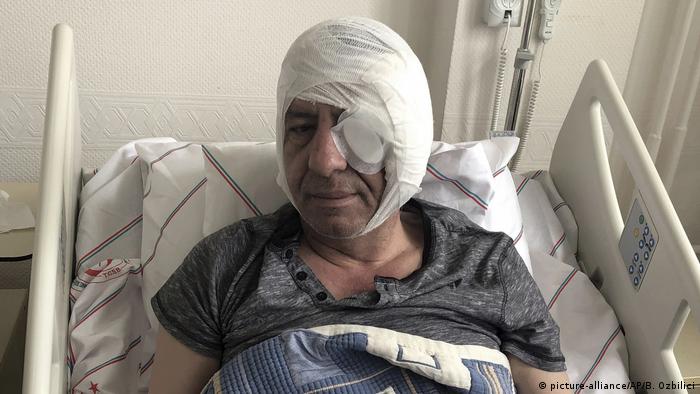 A Turkish journalist who criticized President Recep Tayyip Erdogan was beaten by a group of "people with baseball bats," his newspaper said Saturday, which published pictures of a heavily bandaged Yavuz Selim Demirag in his hospital bed.

Demirag was attacked shortly after appearing on a TV talk show on Friday night, according to the Yenicag daily. His assailants fled in a vehicle and have not been apprehended.

The assault comes as tensions are on the rise over Istanbul's contested mayoral election. Shortly after it became apparent they had lost the vote, the ruling AKP party demanded the vote be re-run, citing irregularities.

Despite already handing the victory to the CHP party candidate Ekrem Imamolgu, the electoral commission reversed its decision and agreed to have a repeat of the vote, a move opposition figures blamed on government pressure.

The vote will now be redone in June, a time during school holidays when many urban CHP supporters go on vacation.

"Politicians who have difficulty espousing the idea of freedom of media and of expression and turn newspapers and journalists into targets, play an important role in these types of attacks," the organization said in a statement.

Demirag was visited in the hospital by CHP leader Kemal Kilicdaroglu, who accused the assailants of having an "intent to kill."

"How can a journalist be beaten with intent to kill just because he participated in a program, voiced his views or criticized someone?" he told reporters. "Where is Turkey going to?"

Yenicag reported that Demirag was in stable condition and set to be released on Sunday.

President Erdogan had argued that the margin of votes was too small for the opposition party win to be valid. The man who won the vote said the electoral body had made a "treacherous decision." (06.05.2019)