A Turkish court has upheld sentences against journalists and staff from newspaper Cumhuriyet. The case is widely viewed as a political move against critical media. 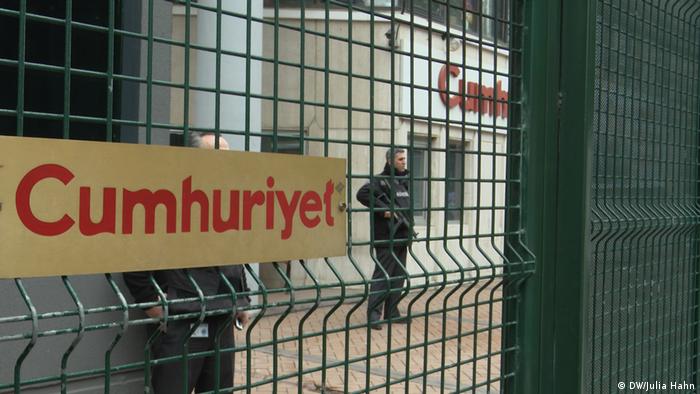 Last year, 14 staff from Cumhuriyet were convicted on terrorism-related charges in what was widely criticized as a political assault against one of Turkey's last bastions of critical media.

The Istanbul appeals court ruled that the previous sentencing was valid.

Cumhuriyet reported that seven staff and journalists, including cartoonist Musa Kart, would not be able to appeal again because their sentences were under five years. They had previously been free pending the appeal.

"An answer has come from the government that is expected to find solutions to all the crises: Throw the cartoonist back in jail!," Kart wrote on Twitter. "Yes, I am going back to jail. Take care of yourself."

Six others will be able to challenge their sentences at the Supreme Court of Appeals because their sentences were more than five years, including former editor-in-chief Murat Sabuncu and the paper's former chief executive, Akin Atalay.

That is also the case for investigative journalist Ahmet Sik, a fierce critic of the government who was elected last year as an MP with the liberal pro-Kurdish Peoples' Democratic Party (HDP). The appeals court said that Sik would not be protected by parliamentary immunity because he was elected after the date of the sentencing and alleged crime, Cumhuriyet reported.

Sik reacted on Twitter with a quote from French philosopher Voltaire: "We have only two days to live; it is not worth our while to spend them kneeling down to contemptible rascals."

The long-running Cumhuriyet case has drawn broad criticism as one of the most notable attacks on the media under President Recep Tayyip Erdogan.

"Today's ruling to send the former Cumhuriyet staff back to prison exposes yet again the way in which politically motivated trials and unsound court decisions are simply rubber stamped by an equally biased appeals process," Amnesty International's Andrew Gardner said.

"The prosecution of scores of journalists and other media workers is an ongoing affront to press freedom and to justice. By using the courts to increase their stranglehold on the media, the authorities have once again displayed the ugly side of Turkey's broken judicial system," he said.

According to the International Press Institute (IPI), Turkey has the highest number of imprisoned journalists in the world, with 155 journalists and media executives in prison. Dozens of media outlets have been shut down over the past several years, leaving a media landscape dominated by pro-government mouthpieces.

Cumhuriyet's former editor-in-chief Can Dundar fled to Germany after being convicted for espionage in 2016 over an article alleging Turkey had sent armed shipments to Islamist rebels in Syria.

Travelers to Turkey might get arrested if they criticize the Erdogan regime on social media, Germany's foreign ministry said in its official guidelines. Even "liking" an anti-government post could cause serious trouble. (25.10.2018)