Turkey′s targeting of Ankara human rights statue a ′reflection of fascism′ | Middle East| News and analysis of events in the Arab world | DW | 22.05.2018

One year ago, Turkish police erected barriers around a monument in Ankara dedicated to human rights. The statue has become a symbol of the country's state of emergency — and the erosion of human rights it brings. 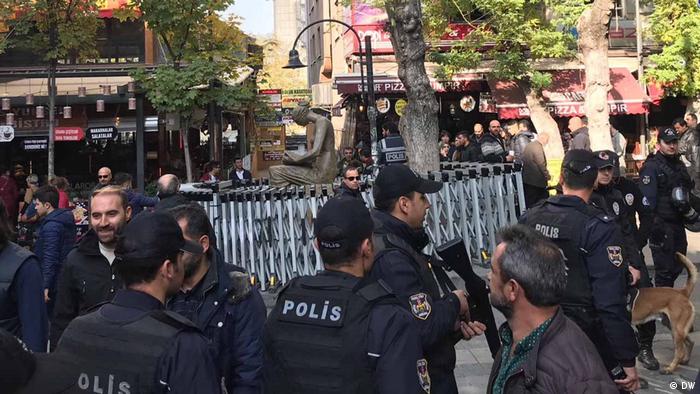 On one of Ankara's busiest streets stands a bronze statue of a woman holding a human rights declaration in her hand. Police in the Turkish capital guard the monument around the clock. No one is allowed to approach it, and photos and videos are forbidden. Police say the monument has been barricaded off for security reasons.

The statue was erected in 1990 and people of all political convictions have gathered there ever since. It has been a meeting point for protests and a place to address the media. It was a gathering point for Ankara citizens during Istanbul's 2013 Gezi Park protests, too.

Things changed after the failed coup on June 15, 2016. Turkey has been under a state of emergency since then, and it was extended for the seventh time in April. Since that failed coup, 228,000 people have been arrested and a further 116,000 dismissed from public service, according to the Turkish Interior Ministry.

Scientist Nuriye Gulmen and grade school teacher Semih Ozakca were among the thousands of people who lost their jobs. They spent months after their sackings sitting beside the Ankara human rights monument, demanding their jobs be reinstated. On May 23, 2017 police cordoned off the bronze figure with a metal barrier and arrested Gulmen and Ozakca.

Lawmakers from Turkey's largest opposition faction, the Republican People's Party (CHP), called for their immediate release. Party members sat beside the monument in protest. "Other people joined us, but the police tried to keep them away," CHP politician Ali Haydar Hakverdi told DW, explaining how the police set up a metal barrier. He described the situation as "utter despotism."

When people knocked over the barrier, police added two rows of barriers the next day, Hakverdi said.

Daily protests followed, which the police countered with violent force that was documented on social media. Protesters were detained in the morning and let go in the evening. Ankara's governor declared the barriers a "security measure" stemming from Turkey's state of emergency.

"As far as I am concerned, the barriers are a reflection of the fascism in our country," the scientist Gulmen told DW a year after the incident, arguing that the acts of state repression only show the government's powerlessness. "It doesn't make sense to 'detain' a monument," she said. "But the message to the people is clear: 'Look, this is a dangerous place!'"

That's what the government is trying to convey, Gulmen added. 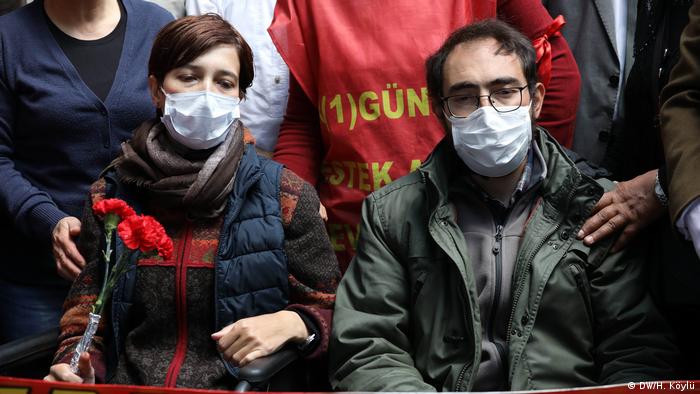 The teacher Ozakca was released roughly half-a-year after his arrest. Gulmen was charged with membership in a terrorist organization, but also ultimately released. The two went on a 324-day hunger strike after losing their jobs. They ended the strike in January, when Turkey's State of Emergency Commission rejected their demand that their employment be reinstated. Now they are both protesting again, not far from the Ankara monument.

'Symbol of the state of emergency'

Turkish sculptor Metin Yurdanur gifted the bronze figure to Ankara's Cankaya district 28 years ago. Like all of his works, this monument belongs to humankind, he told DW. "I want all of my works to find a place in a peaceful world."

Hakverdi said the CHP petitioned for the barriers to be removed but it was denied for security reasons, and he doesn't believe those circumstances are likely to change anytime soon. "The barriers are completely arbitrary, a symbol of the state of emergency," he argued, adding that the Turkish government wants to make it clear that it will not lift the state of emergency, and will continue to rule the country in that manner.

It is under the cloud of this controversial state of emergency that Turkey is headed for presidential and parliamentary elections on June 24.