Turkey′s femicide problem: All eyes on court verdicts | Europe | News and current affairs from around the continent | DW | 19.06.2022 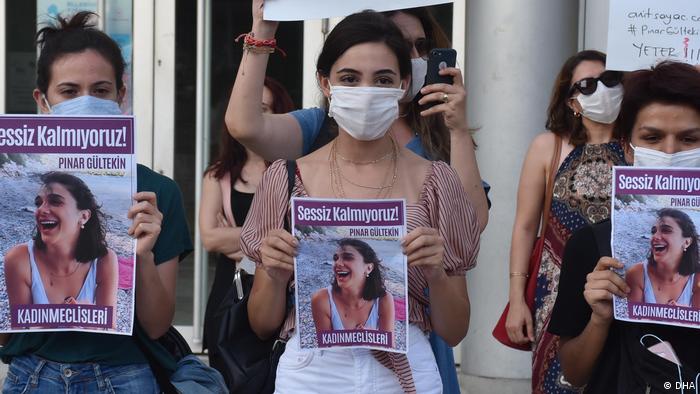 Forensic investigations revealed that Gultekin was strangled to death and then burned by her ex-boyfriend, Cemal Metin Avci, who confessed to the murder.

Gultekin's murder was the latest in a string of "femicides" — the deaths of women at the hands of their spouses and partners — that have sparked public outrage and demonstrations in Turkey. According to the country's We Will Stop Femicide Platform, Gultekin was among at least 300 women killed in 2020.

Avci was arrested on charges of "deliberately killing with monstrous feeling or causing torment." He faces aggravated life imprisonment, while his family members face up to five years in prison for aiding and abetting Avci, helping to cover up his tracks and concealing evidence of the crime.

A court in Mugla will announce a verdict on Monday, June 20.

So far, the trial has proceeded along familiar lines, according to lawyers representing the Gultekin family.

Turkish courts often interpret laws leniently in cases of gender-based violence and a controversial legal option of "unjustified provocation," Article 29 of the Turkish Criminal Code,is often used to reduce sentences for men accused of such crimes.

In addition, the sentence can be reduced based on "good conduct of the perpetrator," which is at the discretion of the judge. 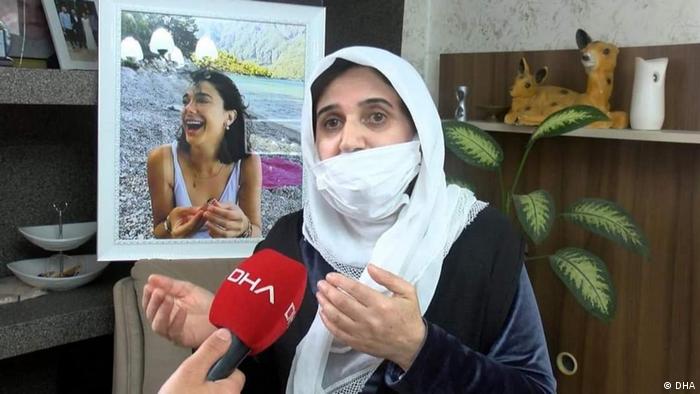 Sefika Gultekin, Pinar's mother, is seen here with a photo of her murdered daughter

Perpetrators often say they committed the murder in a state of anger or severe distress caused by an "unjustified provocation."

That's also how Cemal Metin Avci behaved during the trial, Kubra Deniz Celik, the lawyer representing the Gultekin family, told DW. "He changed his defense several times to benefit from the 'unjust provocation' article. 'She threatened me and I killed her,' 'She stabbed me and I killed her,'" Celik said. "We refuted his arguments."

"Unjust provocation" paves the way for victim-blaming in femicide cases. The murdered women's lifestyle is often scrutinized and finds its way into judgments. Lawyer Deniz said the court in Mugla searched for evidence to support Avci's defence based on "unjust provocation."

"Pinar's private life was put on trial in the courtroom. Judges looked for a reason: 'She is murdered but why?" said Deniz. "Data history on her smartphone was requested. We told the court that this kind of information would not have any impact on the judgment, but the court insisted."

The long-awaited verdict on Pinar Gultekin's murder comes in the same week as the Council of State in Ankara, Turkey's highest administrative court, is expected to hand down its final decision on Turkey's exit from the Council of Europe Convention on Preventing and Combating Violence against Women and Domestic Violence, better known as the Istanbul Convention.

That further fueled protests, with celebrities joining in campaigns on social media to draw attention to Turkey's problem with femicide. 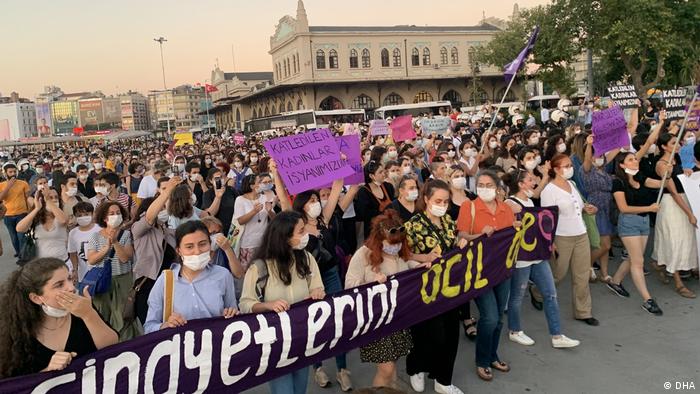 Femicide and violence against women are serious problems in Turkey, and have sparked frequent protests

The Istanbul Convention, which requires governments to adopt legislation prosecuting perpetrators of domestic violence and similar abuse as well as marital rape and female genital mutilation, has been described by some members of Turkey's conservative government as a "trap" that would lead to the destruction of the traditional family. It's also been criticized for its apparent support of LGBTQ rights.

In May last year, Erdogan issued a presidential decree, pulling Turkey out of the Istanbul Convention — a move that sparked legal challenges by women's rights groups and opposition parties. According to the Council of State prosecutor, the nullification of the Istanbul Convention by a presidential decree was unlawful since the convention was ratified by the Turkish parliament.

Turkey's highest administrative court is expected to give its final decision on the issue on June 23.

Activists have argue that since Turkey withdrew from the treaty, gender-based violence had increased.

Lawyer Gokcecicek Ayata from The Women's Platform for Equality (ESİK) said Turkey can only abolish the convention by parliamentary decision. She believes Turkey's withdrawal from the Istanbul Convention has been encouraging male perpetrators.

"You cannot stop violence against women by increasing penalties for offenders. We need an integrated approach based on gender equality," Ayata told DW.

Erdogan and prominent conservative figures in the government have repeatedly said they see gender equality as contradictory to the nature of men and women, and have been hostile to feminist ideology.

"Our religion regards motherhood very highly. Feminists do not understand that, they reject motherhood," Erdogan said back in 2014.

Activists have also said the government is increasingly pressuring women's rights organizations and trying to shut them down.

Earlier this month, prosecutors filed a lawsuit against the We Will Stop Femicide Platform, which has been campaigning against the murder and abuse of women since it was set up in 2010.

The Istanbul Public Prosecutor's Office has accused the group of "acting against law and moral values."

The court has postponed the hearing to October 5.

The recent murder of Turkish student Pinar Gültekin by her ex-boyfriend has sparked outrage in Turkey. Women's rights activists are calling for the government to tackle the widespread problem of femicide in the country.

Police have used tear gas to disperse a crowd protesting gender-based violence in Istanbul. Many of the protesters called on the government to resign.