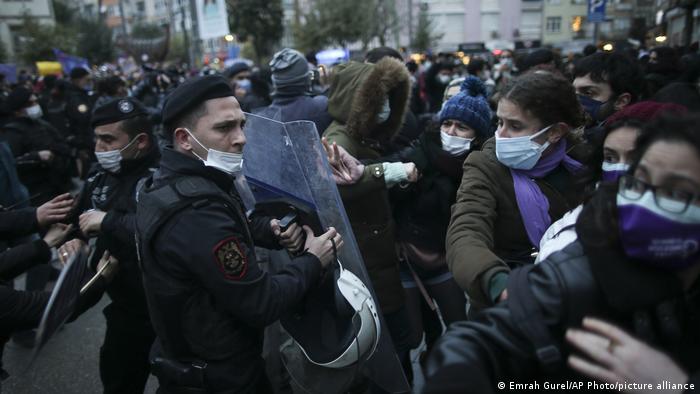 President Recep Tayyip Erdogan has triggered nationwide protests for withdrawing Turkey from an international agreement to prevent violence against women.

The decision comes amid increasing calls in Turkey to combat domestic violence as femicide rates rise.

"The guarantee of women's rights are the current regulations in our bylaws, primarily our Constitution. Our judicial system is dynamic and strong enough to implement new regulations as needed," Family, Labour and Social Policies Minister Zehra Zumrut Selcuk said on Twitter.

"I’m utterly appalled to learn that tonight Turkish government has officially announced they are withdrawing from Istanbul Convention. This in a country where three women are killed daily and femicide is a huge crisis," prominent Turkish author Elif Shafak wrote on Twitter.

Reporting from a rally in Istanbul, DW's Julia Hahn said many women responded to the decision with "anger and outrage."

Last year, senior politicians in Erdogan's conservative party, the AKP, "started arguing that this convention encourages immoral lifestyles like homosexuality. They were met with massive protests by women at the time," Hahn said.

But now "Erdogan has bowed in to pressure from hardliners in his coalition," Hahn continued, noting that the Turkish president is trying to use this issue "to re-energize his voter base amidst a period of economic downturn," she said.

As thousands rally across the nation today, organizers are expecting more protests in the next days and weeks to come, she added.

"Since even conservative women are in favor of the convention, there must be some kind of political rational from President Erdogan to come up with this decision at this time," reported Hahn.

What is the Istanbul Convention?

The 2011 agreement, commonly referred to as the Istanbul Convention, was drafted by the Council of Europe in the Turkish city in 2011. It is a legal framework seeking to protect women and promote gender equality through legislation, education and spreading awareness.

According to the accord, signatories had to "take the necessary legislative and other measures to adopt and implement state-wide effective, comprehensive and coordinated policies encompassing all relevant measures" to prevent violence against women.

The convention was signed by 45 European countries, plus the EU as an institution.

Some conservatives in Turkey say the deal threatens family structures and  promotes homosexuality, citing its principle of non-discrimination on the grounds of sexual orientation.

What is the situation for women in Turkey?

Women's rights groups had said Turkish authorities were not applying the legal norms of the Istanbul Convention nor providing the intended assistance and protective measures for women.

Activists also said the pullout was pushing Ankara further from aligning with the European Union's values, which Turkey remains a candidate to join.

At least 38% of women in Turkey are subject to domestic violence, according to the World Health Organization. The 'We Will Stop Femicide' platform reported 300 femicides in Turkey in 2020.

Hundreds of thousands of women had downloaded a smartphone app that Turkey created for them to report domestic violence, according to a Reuters report.