Femicides in Turkey: A problem that is being ignored | Europe | News and current affairs from around the continent | DW | 09.12.2019

A young Turkish woman was recently brutally murdered on her way home — one of 430 women killed in 2019 alone. Women's rights organizations are calling for better protection, but the government is doing almost nothing. 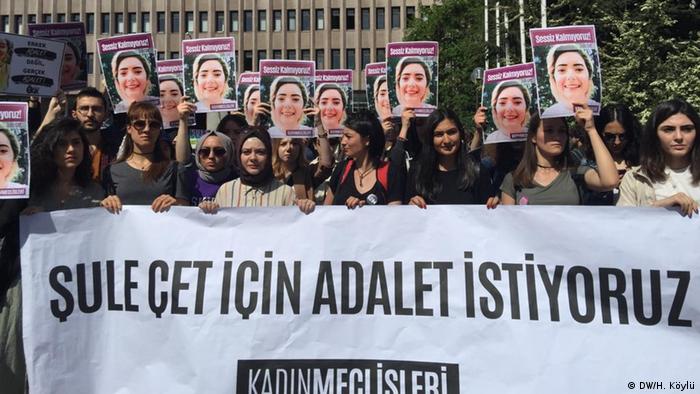 Yet another murder of a woman has shocked the Turkish public and caused a wave of outrage on social media. Late on Tuesday evening last week, the 20-year-old art student Ceren Ozdemir from the Black Sea province of Ordu set out for home after a ballet class. A man followed her to the door of her house, unnoticed. There, he pulled out a knife and stabbed her several times. The student succumbed to her injuries in hospital.

The suspected murderer had already been convicted 12 times for offenses such as infanticide and robbery. Before he killed the young woman, he had escaped from prison. A day later, the man was arrested at a bus stop; state prosecutors are investigating the case.

It has not been just the Turkish public that has been stunned by this crime: High-ranking politicians have also expressed their condolences and announced that there will be consequences. Among other things, many Turks are horrified that a murderer could escape from prison.

"It has wounded all of us very deeply. We all hope that such cases never happen again. Our state prosecutors are investigating all aspects of the incident," said Abdulhamit Gul, the Turkish justice minister from the conservative Islamic party AKP. All the circumstances of the escape were being carefully looked into, Gul said. The Turkish interior minister, Suleyman Soylu, also expressed his condolences and said he regretted that nothing would "bring back our daughter."

It is by no means a matter of course that Turkish government politicians give any consideration to violence against women. For a long time, both the government and the Turkish justice system have swept the problem under the carpet. This, although the organization "We Will Stop Femicide" puts the number of registered murders of women in the country so far this year at 430.

But the internet community and women's rights groups have put government and judiciary under increasing pressure. In the past few months, several acts of extreme violence have made headlines and vividly shown that often, not enough action is taken when women are victims of violence.

The murder of 23-year-old Sule Cet from Ankara — and the way this crime was depicted by investigators — also caused widespread outrage. The young woman was raped in the office by two drunk men, one of them her boss, and then thrown out of the window. The men told the police afterward that Cet had taken her own life.

The trial went on for half a year and was accompanied by demonstrations and statements of solidarity from women, along with much response on social media. On Tuesday last week, the court in Ankara announced that one perpetrator was receiving a life sentence and his accomplice an almost 19-year prison term.

"We will never forget that the bureau of investigation tried to hush up the case. We women resisted and showed solidarity,” said Hulya Gulbahar, spokeswoman of the women's rights organization "Platform for Equality Mechanisms," after the sentences were announced. 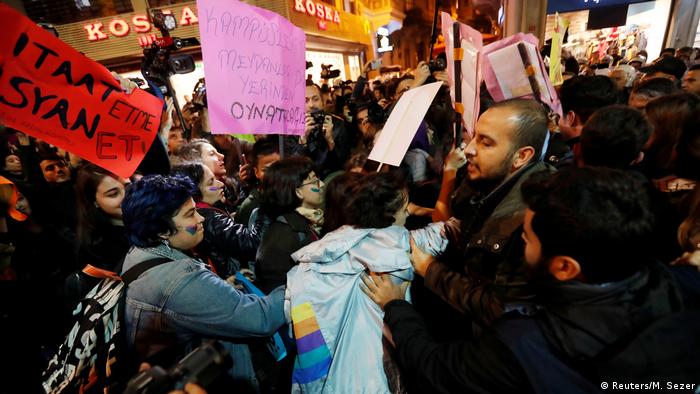 Women's rights groups now hope that the public pressure generated by such cases will bring about a social transformation, one that is supported not only by civil society but also by politicians.

Here, many Turkish women are putting their faith in the Istanbul Convention, a Council of Europe agreement from 2014 on preventing and combating violence against women and domestic violence. The signatory nations committed themselves to creating the requisite conditions for fighting the problem. Turkey ratified the agreement five years ago and gave it a legal basis as a law for the prevention of violence against women and the protection of the family.

But critics say that in practice, the legal norms of the Istanbul Convention are not being applied and the intended assistance and protective measures for women are not being implemented. Violence and discrimination against women, they say, can be prevented only when the judiciary and prosecution authorities act on the guidelines contained in the agreement.

There must be a certain awareness on the part of justice officials and politicians if laws to protect women are to be put into practice, says the Berlin-based women's rights activist Sehnaz Kiymaz Bahceci. But, she says, "the government lacks the will to meet the obligations of the agreement."

Gokce Yazar from the Sanliurfa bar association sees patriarchal family structures and cultural customs as the problem. "It is normal for a woman who is threatened by her husband and fears for her life to seek protection from the state. The legal provisions are clear, but even so, they are often told: 'Go back to your husband.'"

Even if members of the government are now reacting with shock to the murder of Ceren Ozdemir, no political will to combat violence against women in any sustained way is discernible. The left-leaning, pro-Kurdish HDP had proposed setting up a parliamentary commission to look into the issue, but the ruling AKP and the ultranationalist MHP rejected the idea in November.

And when some 2,000 women gathered in Istanbul on the International Day for the Elimination of Violence against Women on November 25 to protest against femicides, among other things, police broke up the rally with tear gas and plastic bullets.

The girl was on her way to the court when a group of men, including two of her accused rapists, dragged her to a nearby field and set her on fire. Another rape case in India last week caused huge uproar in the country. (05.12.2019)