Police break up Istanbul protest of violence against women

Hundreds of women gathered in Istanbul to perform a feminist protest dance and song from Chile. The viral song defends rape victims and denounces the state for not doing enough to combat violence against women. 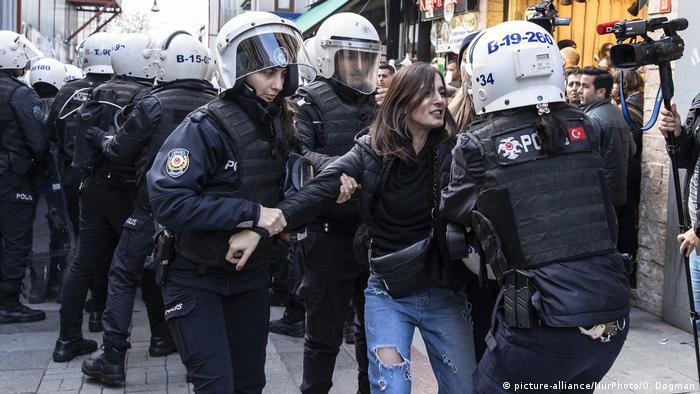 Turkish police broke up a demonstration by hundreds of women in Istanbul on Sunday, who had gathered in the city's Kadikoy district to protest violence against women.

The women had gathered to perform "A rapist in your path," a coordinated dance and song with a feminist message. It was created by Chilean group Las Tesis and went viral after it was performed by a large crowd in Santiago, Chile.

The song denounces the state for not doing enough to combat violence against women and in one key section, the women chant "the rapist is you,” to reject the notion that victims bear any responsibility when they are raped.

Since the video of the protest was posted on social media, women in cities like Mexico City, Bogota, New York, Madrid, Paris and Delhi have performed it during demonstrations.

Istanbul police deployed tear gas to stop the rally and arrested some of the women. Among them was the leader of Turkish feminist group "We Will Stop Femicide Platform," Fidan Ataselim, local activist Kadin Meclisleri said on Twitter.

Demonstrators are said to have performed the Spanish-language protest dance in Turkish and shortly thereafter, police confiscated their megaphones, EFE news agency reported.

"We came to scream against patriarchal violence and they have attacked us,” one protester told EFE.

A performance in Spanish was also delivered, shortly before authorities broke up the gathering.

Violence against women is a widespread problem in Turkey. Women's rights groups have blasted the Turkish government for not tackling the issue and for seeking to impose a conservative ideology that oppresses women.

According to figures provided by "We Will Stop Femicide Platform," 440 women were killed in gender violence last year; more than a quarter of those were murdered by their spouse.

Rape, coercion or even forced prostitution: More than 114,000 women were abused by their partner or ex-partner in Germany last year, according to new figures released on International Day Against Violence Against Women. (25.11.2019)

Women are on the front lines of protests in Lebanon — and they are inspiring feminists in other Arab countries to stand up, too. The masculine ridicule has been relentless, but so has the feminist response. (24.10.2019)

Is France doing enough against femicides?

France is one of the countries with the highest number of femicides in Europe. The government is working on a new law to better protect women, but women's groups say it falls far short of what is needed. (24.11.2019)