Opinion: Women in Turkey (and elsewhere) are not fair game

A Turkish man kills his former wife in broad daylight, and thousands take to the streets to protest violence against women. But the shocking crime is not just a problem in Turkey, writes Beate Hinrichs. 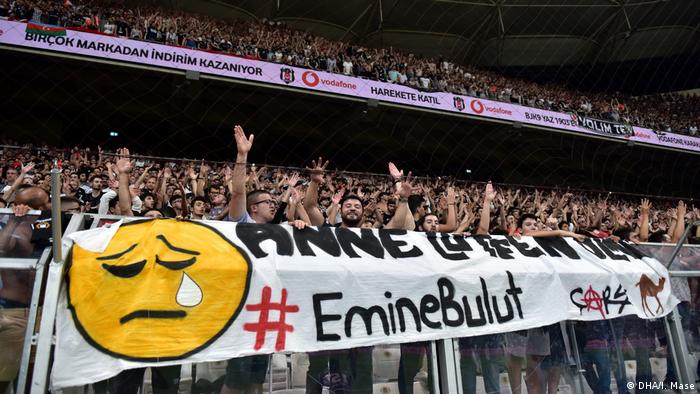 The murder of a Turkish woman by her ex-husband in front of her 10-year-old daughter has once again drawn attention to issue of violence against women in Turkey.

On August 18, 38-year-old Emine Bulut met her ex-husband in a cafe to discuss custody of their daughter. During the discussion, the man felt he was being "insulted" (that's how he characterized it later) and repeatedly stabbed Bulut with a knife. "I don't want to die," she called out, as her daughter begged: "Mum, please don't die!" She later succumbed to her injuries in hospital.

A video of the attack published online has sparked outrage in Turkey. Since the attack, thousands of women have taken to the streets to protest violence, many holding signs saying "We want to live!" Celebrities, politicians from both the ruling and opposition parties and Istanbul soccer clubs Besiktas and Fenerbahce have denounced the murder, with Fenerbahce players wearing black shirts emblazoned with #EmineBulut.

Emine Bulut was just one of several hundreds of victims in Turkey — per year. In July alone, at least 31 women were killed in Turkey, bringing the total for this year to more than 250, according to NGO data. In 2018, 440 women were victims of violence.

This despite the fact that Turkey has ratified the Council of Europe's 2011 Istanbul Convention that aims to prevent and combat violence against women, like almost all of the 47 member states. The Turkish government, however, has since failed to implement the numerous measures to protect women from violence stipulated in the document.

Violence against women: A global phenomenon

The German government has also ratified the Istanbul Convention — but even Germany has not managed to fulfill all the conditions. Women's shelters must regularly turn away women who seek protection, due to inadequate facilities and funding. And in Germany, too, nearly 150 women were killed within one year by their partners or former partners, according to the latest available statistics.

An EU-wide study shows that one third of all women undergo physical and/or sexual violence, in most cases inflicted by their husbands or partners. Only one-third of those affected turn to the police or an aid organization for help.

So let's clear up a number of prejudices:

Firstly, murder and manslaughter which victimize women in relationships — and violence against women in general — are not simply national or culture phenomena (regardless of quantitative differences), even if some perpetrators have tried to justify themselves with defending their alleged "honor."

Secondly, many women aren't even safe in their own homes. However, it would be too simple to sum the issue up as "domestic violence." The problem is political.

In our patriarchal societies, violence against women is structural. And it's still a problem today, despite all those national and international resolutions, conventions, action plans and laws, in spite of feminist struggles and admirable efforts (by both women and men) and remarkable progress in the last decades.

Power of violence, violence of the powerful

In global conflicts and in dictatorships, women are still tortured and raped in order to "break" opponents — bringing us back to the defense of "honor."

Even in more democratic societies, the problem is structural: US President Donald Trump, one of the world's most powerful men, once claimed with a smirk that being a star allowed him to grab women "by the pussy" without repercussions. What sort of signal is that? The #MeToo campaign, among others, has made it clear that this was not an isolated case.

The prosecution of domestic violence around the world ranges from unsatisfactory to downright awful. Victims can only rarely expect justice to be served by the often male-dominated police forces and judicial systems, one of the reasons why only a fraction of the crimes are ever reported.

For many men, women remain fair game. Forget all that talk of partnership, or equal footing.

And no, I don't equate traumatizing, life-destroying violence with sexist remarks — of course, there's a difference. And yes, in some countries violence is a much more serious problem than in others. But the underlying structural problem is found worldwide, and as long as we fail to raise that awareness in the minds of everyone, we will simply pass the problem from generation to generation.

Protesters in cities across Europe and elsewhere have marked the International Day for the Elimination of Violence against Women. Demonstrators in some cities were met with tear gas. (25.11.2018)

Thousands of women defied a ban on marches on a central shopping street in Istanbul and were met with shoving, pepper spray, tear gas and dogs. The marchers said the government protects men who abuse and kill women. (08.03.2019)

Puerto Rico declares state of emergency over femicides 4m ago

Opinion: Egypt is synonymous with hopelessness 6h ago