Turkey's Erdogan sworn in as president

Outgoing Turkish Prime Minister Recep Tayyip Erdogan has been sworn in as president. The new post extends his more-than-decadelong political domination of the country. 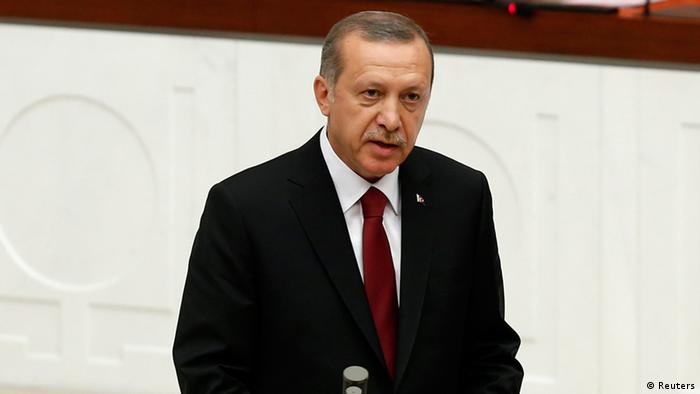 Erdogan took his oath of office in a special session of parliament in the Turkish capital, Ankara, attended by heads of state from a dozen nations in eastern Europe, Africa, Central Asia and the Middle East.

"In my capacity as President of the Republic, I swear upon my honor and repute before the great Turkish nation and before history to safeguard the existence and independence of the state," Erdogan said, reading the oath of office.

Many leaders of top Western states were conspicuous at the ceremony only by their absence, with the United States, for example, only sending its charge d'affaires in Ankara.

Erdogan has been accused of authoritarian tendencies by many in the West.

Among the guests was to be Armenian Foreign Minister Edward Nalbandian, whose country has no diplomatic ties with its neighbor against the background of a long history of animosity.

Ukraine's Petro Poroshenko canceled his planned trip to Turkey amid an escalating crisis in his country.

Erdogan was elected on August 10 with 52 percent of the vote in the country's first-ever direct presidential elections. If he remains for the five-year term, it will see him rule Turkey longer than its modern founder, Mustafa Kemal Ataturk. He is permitted to serve two mandates.

The outgoing prime minister succeeds Abdullah Gül, but is widely expected to look to wield more real power than the latter, who acted more in the ceremonial capacity expected of the post up to now.

Analysts say he is likely to change the constitution after general elections last year to make the presidency more similar to that in countries such as France, where the president is executive head of state.

To do so, he will, however, require a two-thirds majority in parliament, or have the changes approved by 50 percent of voters at popular referendums.

Critics fear that Erdogan's Islamizing tendencies, already apparent while he was prime minister, could further endanger the separation of state and religion - firmly established by Ataturk - during his time as president.

His political opponents are also concerned that they may be targeted by more of the heavy-handed measures used by Erdogan in the past to crack down on those who question his politics.

Erdogan was required by the Turkish constitution to sever ties to the ruling Justice and Development Party (AKP) that he helped found. He stepped down as leader on Wednesday, handing the reins to his longtime ally, former Foreign Minister Ahmet Davutoglu, who is also to become his successor as prime minister.

However, Erdogan is expected to retain considerable influence over the party.

Davutoglu, who became foreign minister in 2009, has pledged to join the new president in building a new Turkey "hand-in-hand, shoulder-to-shoulder."

He is to form a new cabinet by Friday.