The European Court of Human Rights has received a statement from Ankara outlining why Yucel remains in detention. The reporter has taken his case to the ECHR after Turkish courts rejected several requests for release. 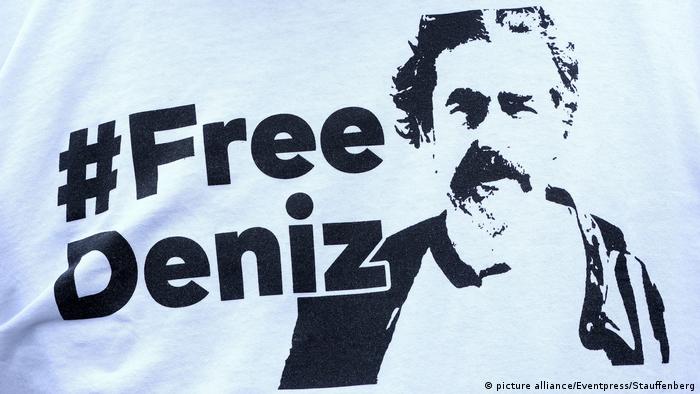 The Turkish government submitted its statement on Tuesday to the European Court of Human Rights (ECHR) in Strasbourg, explaining why Turkish-German journalist Deniz Yucel has remained in detention without trial since the beginning of the year.

Turkey was initially scheduled to give its position by the end of October. However, at Ankara's request, the court agreed to twice extend the deadline, the second extension would have expired at midnight on Tuesday.

The contents of the document have not been made public, although it will be forwarded to Yucel and his attorneys, as well as all third parties involved in the case. These include the German government, the writers' association PEN International, the United Nations special rapporteur on freedom of expression, the Council of Europe's commissioner for human rights, and 10 further NGOs and rights bodies.

Yucel, a correspondent for the German daily Die Welt, was arrested in February on charges of sedition and disseminating propaganda affiliated with terror groups. The 44-year-old reporter denies the charges and has demanded a fair and speedy trial from the Turkish judiciary. With no court date set, Yucel has also made several demands that he be released, all of which were dismissed by the Turkish Constitutional Court.

In an interview with DW, Yucel's attorney Veysel Ok said that Yucel had been held in solitary confinement as a means of punishment.

"We can therefore say, unfortunately, that Deniz is receiving a kind of special treatment," Ok said. "The fact that Deniz is being isolated in this way before appearing in front of a judge is already a punishment in itself."

Yucel subsequently took his case to the ECHR, which has accused Turkey of violating its fundamental rights to freedom and freedom of the press.

The court asked the Turkish government to explain in its statement why Yucel had remained in custody for so long. Article 5 of the Human Rights Convention states that detention on remand must be limited to a "reasonable period of time." Exceptions, however, can be granted if the subject is deemed a flight risk or could be suspected of destroying evidence or bribing witnesses.

Should the court find that Turkey has been in breach, it would be obliged to release Yucel.

Read more: Opinion: That's not how the rule of law in Turkey should work

However, Turkey has one of the worst records of all countries under the ECHR's jurisdiction when it comes to implementing the court's rulings.

Ankara has also yet to respond to claims made by Yucel that he has been imprisoned for previous criticisms of the Turkish government.