Turkish prosecutors are seeking jail terms of 83 and 142 years for the co-leaders of the pro-Kurdish Peoples' Democratic Party (HDP). The leaders were arrested in November, drawing strong international condemnation. 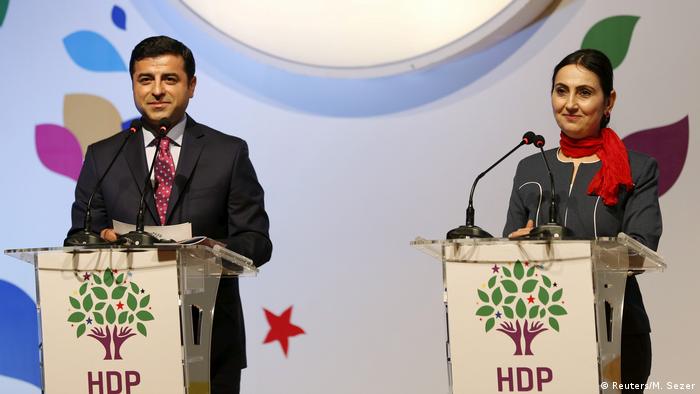 Aysel Tugluk leading member of the pro-Kurdish HDP has been arrested on terrorism charges. Tugluk had been helping other arrested HDP members with their legal battles amidst a government crackdown. (26.12.2016)

'They are aiding and abetting human rights violations'

Kurdish municipal leaders have been detained in Turkey. Selahattin Demirtas, co-president of the Peoples' Democratic Party, spoke with DW about Erdogan's war against Kurdish factions and EU complicity. (28.10.2016)

Prosecutors in Turkey are seeking a prison sentence of up to 142 years for Selahattin Demirtas, the co-leader of the third-largest party in parliament, reported the state-run Anadolu news agency on Tuesday.

Demirtas' co-leader, Figen Yuksekdag, faces up to 83 years behind bars, according to the indictment which was also viewed by Reuters news agency.

The two are also charged with inciting violence and spreading propaganda in support of a terrorist organization.

Demirtas and Yuksekdag were arrested last November and are already in jail along with nine other members of parliament from the HDP as part of a terrorism investigation. The arrests drew international condemnation over what rights groups view as a growing crackdown on dissent under President Recep Tayyip Erdogan.

The MPs are accused of membership in the outlawed Kurdistan Workers' Party (PKK), which has been deemed a terrorist organization by Turkey, the United States and the European Union.

The HDP has denied having any ties to the PKK and said the party is being targeted over its opposition to Erdogan's drive to move Turkey to a presidential system.

More than 2,700 members of the HDP and its sister organizations have been detained or arrested since 2015, when a ceasefire and peace process broke down between the state and the PKK, reigniting violence.

The United States has expressed deep concern over the arrests of Demirtas and Yuksekdag, while Germany and Denmark have summoned Turkish diplomats over the incident.