Authorities have published a "selfie video" taken by the alleged gunman who killed nearly 40 people at an Istanbul club on New Year's Eve. The suspect was able to flee on foot and is still on the run. 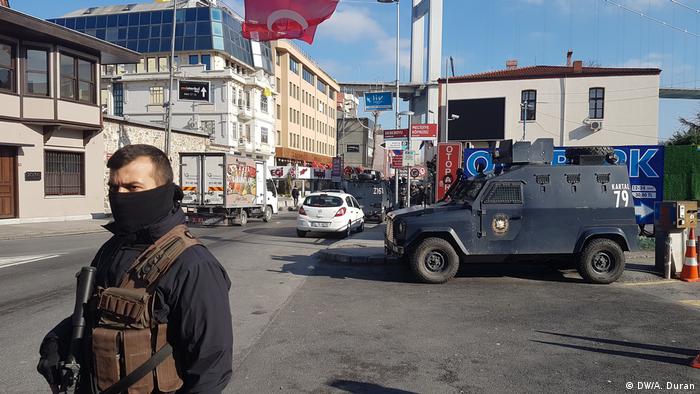 Turkish media released images of a man suspected of killing 39 people at a New Year's Eve party in an Istanbul nightclub on Tuesday. The footage includes a "selfie video" allegedly taken by the suspect himself in Taksim Square, as well as surveillance images.

The gunman has not been yet been identified, but multiple local media reports said he was believed to be from a Central Asian country or a member of China's Muslim Uighur minority. Newspapers said that he had possibly arrived in the Turkish city of Konya with his wife and two children, and that his family had been detained.

The Hurriyet daily also reported that the assailant had fought with "Islamic State" (IS) jihadists in Syria and demonstrated expert knowledge of the weapons used in the shooting at the Reina nightclub.

This man was not, however, amongst the eight suspects detained earlier in the day in the connection with the attack on New Year's Eve, according to the Anadolu news agency. Authorities deployed helicopters and set up more road blocks on Tuesday as the search widened for the gunman who was able to flee on foot after committing the attack, which was later claimed by IS.

The deaths, a statement attributed to IS said, were in retaliation for Turkish support for the coalition against them.

Victims of the mass-shooting that took place at the upscale Reina club in the early hours of the new year came not only from Turkey but from all around the world, including Canada, Germany, the US, Lebanon and Jordan.

Later on Tuesday, Turkey's NTV broadcaster reported that two foreign nationals had been arrested at Ataturk airport over ties to the attack, but did not say right away if either of them were the gunman seen in the video.

The attack came after a year of several such violent incidents in Turkey, including several bombings carried out by IS and pro-Kurdish militants and a coup attempt in July that left hundreds dead.

Following the deadly attack on a nightclub in Istanbul, security experts say that terror attacks will continue to set the agenda in Turkey in 2017. The government's policy in Iraq and Syria plays a significant role. (03.01.2017)