Dozens of people killed in attack on Istanbul nightclub

At least 39 people were killed in Istanbul, when a terror attack targeted visitors of a nightclub during the New Year's celebrations. Many of the victims were foreigners. Security forces were searching the city.

A manhunt was underway in Istanbul after at least one attacker, reportedly dressed as Santa Claus, opened fire at visitors of the high-end Reina nightclub. Hundreds of people were in the building at the moment of the attack, which started less than one hour after Turkey rang in the new year.

At least 39 people were killed and 69 were in hospital, officials said early on Sunday.

Interior Minister Suleyman Soylu confirmed the attacker was still at large in televised remarks: "The search for the terrorist continues... I hope [the assailant] will be captured quickly, God willing."

The authorities managed to identify 21 victims, at least 15 of whom are foreigners, Soylu added.

Istanbul governor Vasip Sahin described the incident as a terror attack, adding, "a terrorist with a long-range weapon...brutally and savagely carried out this incident by firing bullets on innocent people who were there solely to celebrate the New Year and have fun." Sahin did not say what group might have been involved. 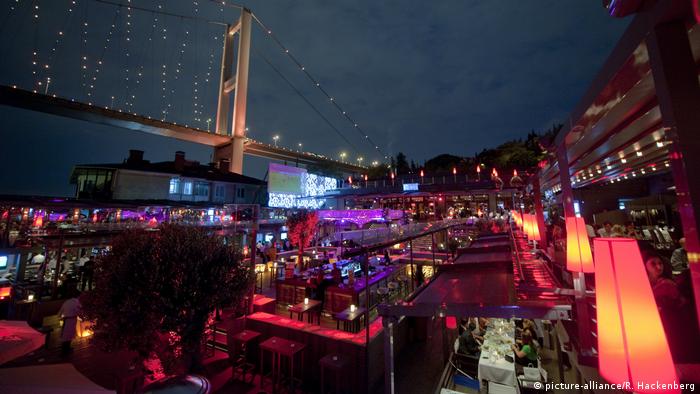 The attack occurred at the prominent Reina nightclub, which is on the European side of the Bosphorus Strait (pictured)

One witness told the Associated Press she saw bodies in the nightclub following the attack. "Before I could understand what was happening, my husband fell on top me," said the witness outside Istanbul's Sisli hospital. "I had to lift several bodies from on top of me before I could get out." The witness' husband was not in serious condition.

Broadcaster CNN Türk and German press agency dpa said the attack was carried out by at least two attackers who were wearing Santa Claus outfits and opened fire with automatic weapons.

Professional footballer Sefa Boydas, who was at the scene, also said that there were two gunmen dressed in Santa outfits.

"Just as we were settling down, by the door there was a lot of dust and smoke. Gunshots rang out," he told the AFP news agency. "When those sounds were heard, many girls fainted," he added.

"They say 35 to 40 died but it's probably more because when I was walking, people were walking on top of people."

Dogan said there were at least 700 visitors gathered in the high-end club in the Ortakoy district.

Local reports showed ambulances and police vehicles on the street outside the club, as well as men wearing suits and women in cocktail dresses leaving the building.

The Reina nightclub stands near the Ataturk bridge on the European side of the Bosphorus Strait that splits Istanbul in two. Several patrons jumped into the frigid water to avoid the attack. Rescue crews were immediately dispatched to rescue them.

Security was high in Istanbul following a year filled with violent attacks by the so-called Islamic State (IS) or Kurdish groups that killed more than 180 people. At least 17,000 police officers were on duty for New Year's celebrations in Turkey's largest city, some under cover as street vendors or Santa Claus.

Turkish Minister of Justice Bekir Bozdag tweeted "this is a cowardly and cruel terrorist attack against our Turkey, our peace, our unity, our brotherhood and all of us."

United States President Barack Obama was briefed on the attack and offered US help to Turkish authorities, according to the White House. "The president expressed condolences for the innocent lives lost, directed his team to offer appropriate assistance to the Turkish authorities, as necessary, and keep him updated as warranted," said White House spokesman Eric Schultz in a statement. The White House also called the incident a terror attack and condemned it "in the strongest terms," according to National Security Council spokesman Ned Price in a statement.

Turkey is one the key US allies in NATO and is currently involved into the conflict in Syria, in addition to fighting a Kurdish insurgency on its own soil. During 2016, the predominantly Muslim Turkey has been hit by several deadly terror attacks. NATO Secretary General Jens Stoltenberg expressed his condolences in a tweet following the latest massacre.

The German foreign office also offered its condolences. The attack evoked memories of the 2015 massacre in Paris, when IS terrorists killed 130 people, including 90 in the Bataclan concert hall.

Facebook has activated a safety check following the attack. The nightclub's website is currently down. No group immediately claimed responsibility for the attack.