Turkey has released from prison two Greek soldiers held on charges of military espionage and illegally entering the country. Greek Prime Minister Alexis Tsipras said it was "an act of justice." 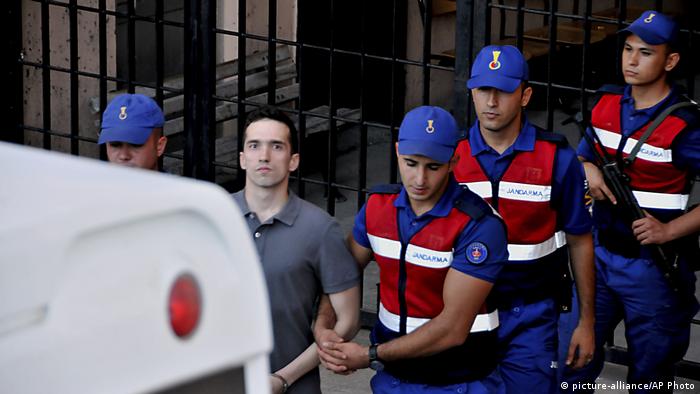 The soldiers — a lieutenant and a sergeant — had been apprehended by officers in a Turkish military zone in early March. They told Turkish authorities they had lost their way due to heavy snow and fog before straying over the land border by mistake.

The soldiers will be tried without being held in detention. The trial date has not yet been set. They are  expected to return to Greece on Wednesday where they will be met by Greece's defense minister and army chief of staff.

"The release of the two Greek officers is an act of justice which will contribute to friendship, good neighborly relations and stability in the region," his office said in a statement.

Tsipras had met with Turkish President Recep Tayyip Erdogan last month on the sidelines of a NATO summit in Brussels, and raised the issue of the soldiers.

Greek politician and the EU's migration commissioner, Dimitris Avramopoulos, said on Twitter the soldiers' release was an "important step for the relations between Turkey and Greece, and the EU as a whole."

The EU had condemned their detention and called for their release.

Read more: Greece issues formal complaint to EU and NATO over detention of soldiers in Turkey

Relations between Athens and Ankara have been complicated by a number of issues from ethnically divided Cyprus to rights in the Aegean Sea.

The failure of Greece to extradite eight Turkish soldiers who escaped to Turkey by helicopter on the night of a 2016 attempted coup has also strained relations between the two NATO allies. Greek courts have argued they would not get a fair trial in Turkey and their lives would be in danger there.