Turkey and Azerbaijan have inaugurated the TANAP pipeline that will bring gas to Europe while bypassing Russia. The project has won political support from both the United States and European Union. 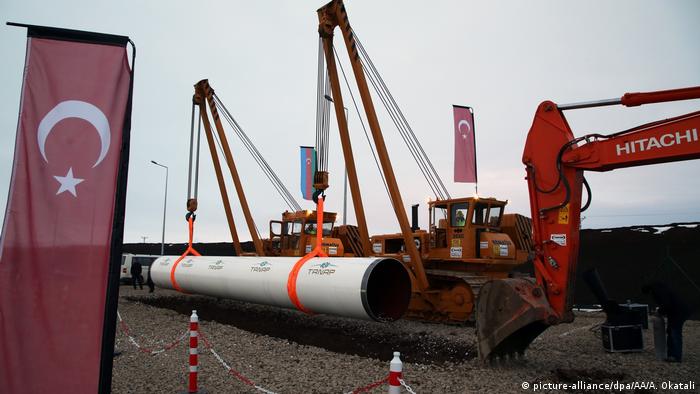 The presidents of Turkey and Azerbaijan have inaugurated a major pipeline that will eventually transport Azerbaijan natural gas to Europe.

The $8.5-billion (€7.2 billion) Trans-Anatolian Natural Gas Pipeline (TANAP) is part of the Southern Gas Corridor, aimed at turning Turkey into an energy hub and diversifying EU natural gas supplies away from Russia.

"Our country is now one step closer to its vision to become a hub of regional energy lines thanks to TANAP," Turkish President Recep Tayyip Erdogan said in the central city of Eskisehir on Tuesday, dubbing the project "the Silk Road of energy."

Azerbaijani President Ilham Aliyev, Ukrainian President Petro Poroshenko and Serbian President Aleksandar Vucic were in attendance at the ceremony which saw the last section of the pipeline put in place.

From Turkey to Italy

The 1,850 kilometer (1,150 miles) TANAP pipeline connects to the South Caucasus Pipeline, which pumps gas from Azerbaijan's Shah Deniz 2 field in the Caspian through Georgia to Turkey.

Another section of the pipeline project, the Trans Adriatic Pipeline (TAP) is slated to bring gas from Turkey through Greece and Albania to Italy by 2020.

Alper Ucok, the Turkish Industry and Business Association representative to Germany, said TANAP shows how Turkey is a key partner in the EU's energy security.

TANAP has the political support of the EU and United States.

European Commission Vice President Maros Sefcovic, who is in charge of the Energy Union, praised the inauguration of TANAP as a key milestone in improving energy security.

"By helping diversify our energy suppliers and routes, the Southern Gas Corridor is strategically important for the EU's energy security, including in the most vulnerable parts, such as Southeast Europe and southern Italy," he said.

Russia's Gazprom has begun construction on the TurkStream gas pipeline under the Black Sea to Turkey. Feeder lines are planned to also supply EU markets. (07.05.2017)