Authorities in Turkey have issued arrest warrants for 42 journalists in the latest crackdown following a failed coup. EU Commission President Juncker has also said the country is in no place to become an EU member soon. 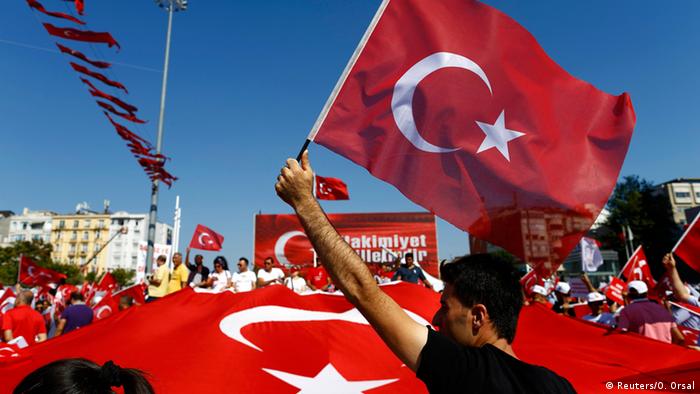 Detention warrants for 42 Turkish journalists have been issued by authorities, Turkish media reported on Monday.

Prominent journalist and former parliamentarian Nazli Ilicak was one of those targeted by the warrants, the television channels NTV and CNN-Turk said. He was fired from pro-government Sabah daily in 2013 for criticizing ministers who were involved in a corruption scandal.

The 2013 corruption scandal was blamed on the US-based cleric Fethullah Gulen who the government also blames for the attempted military coup on July 15.

The arrest warrants are the first of their kind to target members of the press since the government launched a crackdown following the failed coup, reported the Hurriyet daily. The publication also said office of Istanbul anti-terror prosecutor Irfan Fidan issued the warrants.

So far, there was no indication that any of the journalists had been arrested, but the prosecutor said an operation was underway to detain them.

Since the attempted coup, Turkish authorities have suspended, detained or are currently investigating over 60,000 police, soldiers, civil servants, judges and teachers.

Turkey will also remove some ambassadors from their posts over their alleged connections to the failed coup, Turkish Foreign Minister Mevlut Cavusoglu said on Monday to private broadcaster Haberturk TV.

The President of the European Union Commission, Jean-Claude Juncker said the Turkish government's behavior following the failed takeover means the country is a long way off from EU membership.

"I believe that Turkey, in its current state, is not in a position to become a member any time soon and not even over a longer period," Juncker said on French television France 2.

He added that any country which adopts the death penalty has no place in the EU.

Turkish Foreign Minister Cavusoglu said Juncker should not look down on Turkey and said the EU should not threaten Turkey over the possible reinstatement of capital punishment.

Juncker's comments are in line with other EU leaders who have condemned the possibility of reinstating the death penalty in Turkey and expressed concerns about President Recep Tayyip Erdogan.

The EU has not formally suspended membership talks, though a document from 2005 says the commission can recommend suspension of negotiations in the case of a serious breaches of the principles of liberty, democracy, respect for human rights and the rule of law.

A state of emergency has been declared in Turkey, and now parts of the European Convention on Human Rights are suspended. Most EU states don't want conflict with Turkey, but are concerned about its path to dictatorship. (22.07.2016)