Police in Turkey have arrested more than 100 more suspects for their alleged roles in the July 15 putsch attempt. Ankara says it will cooperate with the Council of Europe to ensure just trials for thousands of suspects. 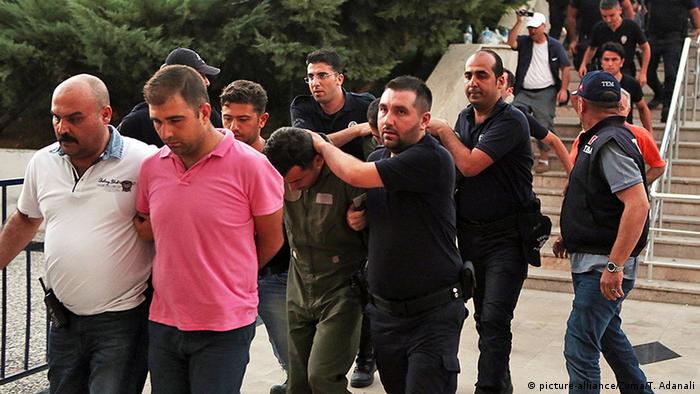 "We [will] cooperate with the Council of Europe to make this process very transparent," Turkish Foreign Minister Mevlut Cavusoglu told reporters after a meeting with the council's head, Thorbjorn Jagland, in Strasbourg.

"We have never forgotten that the rule of law should prevail. Everyone should be brought to justice, even the ones who tried to assassinate the president," Cavusoglu said, adding that the European Convention on Human Rights - a treaty to protect fundamental freedoms - would serve as a guideline for Ankara.

Jagland said it was important to see that "all judicial safeguards were in place and that the presumption of innocence prevails."

On Wednesday, the chief prosecutor's office in Ankara launched an investigation into 105 leaders suspected to belonging to the Gulen-linked terror organization FETO, Anadolu Agency said.

Three journalists working for the "Yenicag" newspaper were arrested and held in a sports hall in Ankara, the nationalist daily reported. A former lawmaker from the Nationalist Movement Party (MHP), Turan Yaldir, was also detained in Ankara. He and the three reporters were critics of the Gulen movement, "Yenicag" reported on Wednesday.

Meanwhile, a lack of space in the country's overflowing prisons has prompted authorities to release more than 35,000 convicts, excluding those imprisoned for crimes such as rape and murder.

Tens of thousands of people - including teachers, journalists, civil servants, soldiers and bureaucrats - have been arrested since a July 15 coup. Hundreds of thousands more have lost their jobs for alleged links with Fethullah Gulen, a US-based cleric accused of spearheading a spiritual movement among Turkish academics and businesses.

Western countries have criticized Ankara's stance, fearing that it is on a witch hunt for dissenters, but the government has justified its actions by pointing out that rogue soldiers commandeered fighter jets and tanks and killed 240 people in the failed putsch.