A Turkish court sentences 92 defendants, including once high-ranking army officials, to life imprisonment over the 2016 coup effort. 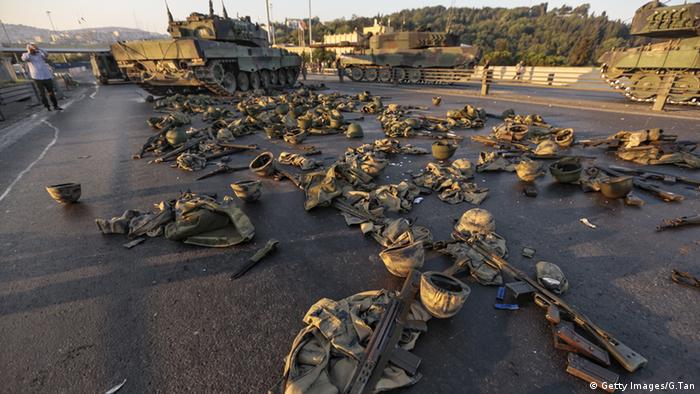 Several trials related to the coup are still ongoing in Turkey

A court on Wednesday sentenced scores of defendants, including former generals, to life imprisonment over their alleged roles in an attempted coup in 2016.

The case, which focused on incidents at land forces headquarters in Ankara, started in 2017 and saw 132 defendants indicted.

Senior army officials were among the 92 who were sentenced to life terms — 12 of them "aggravated" terms with no chance of parole. Among the dozen were some departmental heads of land forces, the state-run news agency Anadolu reported.

More than 250 people were killed in the July 15, 2016, attempt to overthrow the government of President Recep Tayyip Erdogan. During the effort, rogue soldiers took control of warplanes, helicopters and tanks and tried to take over key state institutions.

The court on Wednesday also handed out shorter sentences of up to 19 years to 28 other people. Three more defendants face an ongoing trial while 9 others were acquitted.

Charges ranged from attempted murder to membership of an armed terrorist organization.

A court handedseparate jail sentences last month to leaders of the coup attempt, which Erdogan has sought to blame on supporters of the US-based Muslim cleric Fethullah Gulen.

About 292,000 people have been detained over alleged connections to Gulen, according to the country's interior ministry, with nearly 100,000 of them jailed pending trial.

Some 150,000 civil servants were sacked or suspended after the coup attempt. Courts have imposed more than 2,500 life sentences and the defense ministry says more than 20,000 people have been expelled from the military.

The trial of 224 suspects, which include many former military generals, started almost a year after the July 2016 botched coup against President Erdogan. Ankara has incarcerated thousands of dissidents since then.

Turkey has jailed a German national on charges related to the July 2016 failed coup attempt for the first time, according to media reports. The man was convicted last year but it's only just become public now.

State media in Turkey say that as many as 121 people have been arrested over suspected links to a cleric that the government believes helped organize a 2016 coup.