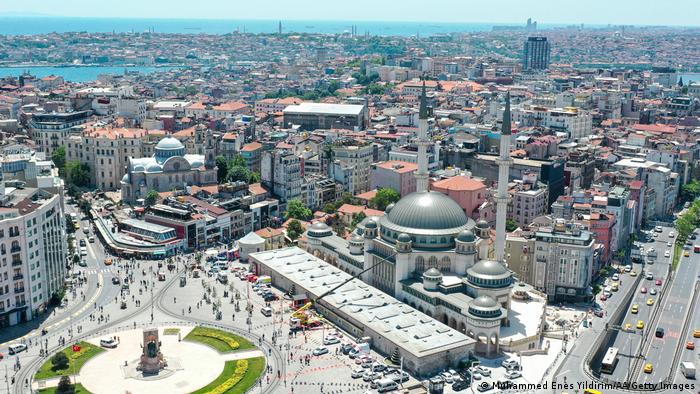 Construction of the mosque started in February 2017.

Turkish President Recep Tayyip Erdogan on Friday inaugurated a large mosque in Istanbul's Taksim Square, fulfilling a decades-old goal of his to build a Muslim house of worship in the heart of Turkey's largest city.

The imposing mosque features a 30-meter (98-feet) high dome and combines the Ottoman and contemporary arch. It can accommodate 4,000 people and is visible from almost any point in the city.

"Taksim Mosque now occupies a prominent place among the symbols of Istanbul," Erdogan said after performing Friday prayers at the site.

"God willing, it will stay until the end of time."

Thousands of worshippers turned up to pray at the mosque. Many were seen performing prayers in the square as the mosque filled up quickly.

Why was the mosque built?

After becoming mayor of Istanbul in 1994, Erdogan, a devout Muslim, criticized the absence of a mosque in Taksim Square. He had emphasized that the only visible religious site in the area was an Orthodox church.

"There wasn't even a prayer room and the faithful had to make do with praying on newspapers on the ground," Erdogan said at Friday's inauguration. A video was shown at the event of Erdogan in 1994 pointing to and promising to build a mosque on to the exact spot where it now stands.

However, the project was mired for decades in court battles and public debate.

Opponents argued that the mosque was an attempt to impose a religious tone on the square, and undermine the legacy of Mustafa Kemal Ataturk, who founded the secular-oriented Turkish republic after the collapse of the Ottoman Empire.

A cultural center in Taksim Square dedicated to Ataturk has been demolished and is being replaced by a new structure that will feature an opera house.

Last year, Erdogan reconverted Hagia Sophia, for centuries the world's largest church, into a mosque and a museum.

The inauguration also came on the date when protests began just 100 meters (328 feet) away in Gezi Parkin 2013, which then spiraled into nationwide demonstrations against Erdogan's government.