Once the symbol of modern Turkey, the Ataturk Cultural Center has been abandoned for a decade since closing in 2008. Amid furious debate about its future, many are unhappy with the current grand plans for the site.

In Istanbul's Taksim Square, in the heart of the metropolis on the Bosporus, a dark concrete skeleton rises ominously, iron bars hanging from its unkempt facade.

Glossy posters advertise a glorious future: this 52,000 square meter space will soon host one of the most modern cultural centers in the world containing an opera house, concert halls, cinema and exhibition spaces. The new Atatürk Cultural Center (AKM) will boast architectural prowess, acoustic superiority, and is set to become a magnet for world-class international stars. That's the plan, anyway.

Should it stay or should it go?

As the dilapidated AKM awaits its glorious future, its glamorous past is fast fading away, however. Once one of the most modern buildings in Turkey, it was the fourth-largest cultural center in the world when it opened in 1969. With Verdi and plays by Arthur Miller on the bill, it expressed the lofty western cultural aspirations of the "Kemalist" elites who forwarded the ideology of the secular founders of the Republic of Turkey. 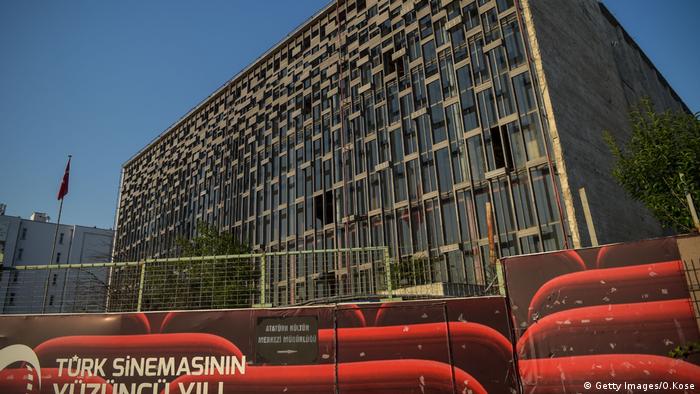 But since the closure in 2008 of the large concrete structure with its prominent glass front, opinions have been bitterly divided about how this great symbol of modern, secular Turkey should be reconstructed.

Atilla Koç, then Minister of Culture and Tourism of the ruling AKP party, moved to demolish the former opera house. Civic initiatives and architects meanwhile fought to preserve it as an architectural icon. They saw a potential demolition by the governing AKP party, which has increasingly restricted artistic freedom in Turkey, as synonymous with the demise of a once secular and western nation.

During the Gezi protests in the summer of 2013, demonstrators made the AKM a symbol of resistance to AKP rule. They hung illuminated banners on the façade reading, "We will not bow" and "Tayyip, be quiet" —­ a reference to reactionary president Recep Tayip Erdogan — and also occupied the rooftop.

Meanwhile, the cracked windows and the crumbling facade of what was once the pride of modern Turkish society is, for some, becoming symbolic of the deterioration of the country.

But when architect Murat Tabanlıoğlu was commissioned to undertake the massive restoration and expansion of the AKM, it was seen as a victory for those who supported the preservation of the Kemal heritage since the architect's father, Hayati Tabanlıoğlu, designed the existing building.

When Tabanlıoğlu presented his vision for the space, it was announced that the core of the former opera house would be preserved and the prominent glass façade reconstructed. Other characteristic elements will also be brought back to life, including the free-floating aluminum staircase typical of the 1960s which gives the foyer its character.

"We will continue in my father's spirit" said the architect of his "recomposition" of the AKM.

Bowing to the religious right?

However, not everyone finds this pledge convincing. Indignation spread when it was announced that a large red-glass sphere would decorate the entrance. To many, this element was reminiscent of the cupula of a mosque and is symbolic of how the AKP has increasingly imposed its Islamicst religious views on a Turkish nation that was established as a secular state.

But Tabanlıoğlu disagrees with this interpretation: "First of all, red is the color that I personally associate with opera," he said. "The spherical shape symbolizes the semicircular arrangement of the seats in a concert hall that generates the best acoustics." Tabanlıoğlu was first and foremost inspired by the "total theater" concept of Bauhaus architect, Walter Gropius.

As the Turkish government continues to censor and even ban artistic institutions, some wonder what will happen to the Istanbul State Theater, Ballet and the Symphony Orchestra, which have been without a home since 2008. Tabanlıoğlu is reassuring: "They will all return to become the hosts of the Cultural Center, which is very important."

The architect's firm is responsible for other landmark buildings including the Istanbul Modern Art Museum, and the Dakar Congress Center. This project promises to be similarly ambitious.

"My goal is to make the house one of the best cultural centers in the world," Tabanlıoğlu  explained. The Turkish capital was the 2010 European Capital of Culture, despite not having an opera house, and politicians want Istanbul's new cultural center to help maintain the country's strong international cultural presence.

But skepticism remains about a center that is likely to open its doors in two years — although President Erdoğan is promising the first quarter of 2019. As part of Istanbul's so-called "Urban Renewal Project," many historic buildings and neighborhoods were demolished and replaced by soulless shopping malls.

Both through its architecture and programming, the new AKM will have to prove that it is not a sterile and functionalistic flagship project, but rather a cosmopolitan cultural center that revives its old ethos and breathes new life into the arts.

Fight back or flee repression? These Turkish artists chose Berlin

Bugra Erol sees his future in Berlin - not in Istanbul. He's one of many Turkish artists who've fled repression. What are problems they've encountered? And how has being in exile affected their work? (30.05.2017)

From the construction boom to violence against women, refugees to the Gezi protests: a Berlin exhibition of modern Turkish photography captures the Bosphorus nation's turmoil through journalistic yet artistic images. (08.09.2017)

Germany and Turkey both want to host Euro 2024 and the deadline for applications is now up. Turkey's chances are considered decent — because of President Recep Tayyip Erdogan, and despite his recent human rights record. (27.04.2018)