Turkey has sent a second ship to search for oil and natural gas in maritime waters that Cyprus claims as its own. The move is set to draw a sharp EU rebuke, though Cyprus has already acted against the first vessel. 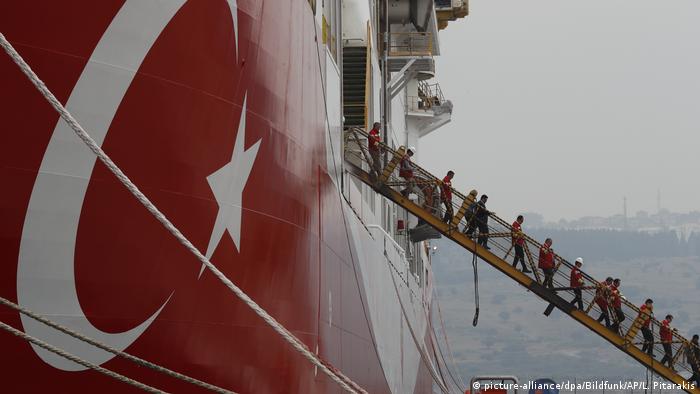 Turkey sent a second drilling ship on Thursday into disputed waters off the coast of Cyprus to search for natural gas and oil, a move expected to escalate tension with the European Union.

Turkish Energy Minister Fatih Donmez launched the ship Yavuz from the port of Dilovasi, in the northwest of the country. It was headed to Cyprus' Karpas peninsula, where it will operate a borehole some 3,300 meters (10,827 feet) deep in an area thought to be rich with natural gas. 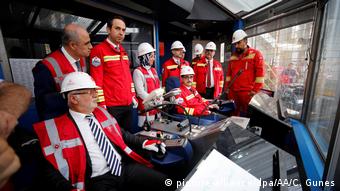 Donmez attended the launch of the ship Yavuz, and press members were also present

Turkey and the internationally recognized government of Cyprus, which have no diplomatic relations with one another, both claim this area under the Mediterranean Sea.

Additionally, Turkey claims that other areas of Cyprus' offshore maritime zone, considered an exclusive economic zone (EEZ), fall under the jurisdiction of Turkish Cypriots, who have their own state in the north of the island recognized only by Turkey.

Cyprus has been divided since 1974, when Turkish troops occupied the northern third of the island in response to a coup backed by the Greek military junta aimed at unification with Greece.

A prolonged peace effort has yet to deliver results, and the discovery of natural resources has complicated the process. 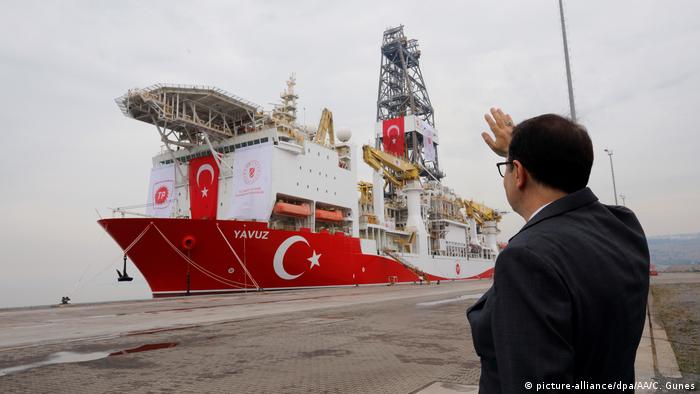 Donmez waves off the oil ship Yavuz as it leaves port, but it may not be smooth sailing depending on the EU's response

The Yavuz is the second ship that Turkey has sent to waters that Cyprus contests are its own. Cyprus previously issued arrest warrants for the crew members of the first ship.

The EU had already reprimanded Turkey for its plans to drill in contested waters, saying on Tuesday it was preparing "appropriate measures" in response. EU leaders are expected to release a formal statement during Thursday's EU summit calling the drilling "illegal," Reuters reported.

The possible course of EU action remains unclear, though possibilities include halting talks with Turkey over a customs union extension or formally suspending Turkey's already frozen bid to enter the EU.

Cyprus is a member of the EU, as is Greece. Greek Prime Minister Alexis Tsipras Thursday called for the EU to deliver a "clear message" to Turkey and accused the country of breaking international law and violating European sovereignty.

Turkey to hold course on drilling

At the vessel's launch, Donmez insisted that Turkey would continue its course of action.

"We will continue the drilling activities that derive from our own legitimate rights uninterrupted," he said after touring the ship.

He also said unilateral agreements made between Cyprus and regional countries had "no legal validity" and were an attempt to "steal" the rights of Turks and Turkish Cypriots.

Turkish President Recep Tayyip Erdogan also said over the weekend that Turkey would not back down from looking for gas "in those areas that are ours."

Ankara argues that its actions lie within international maritime law and that Turkish Cypriots had a right to share the island's offshore resources. Cyprus, meanwhile, maintains that defining its offshore maritime zone is its sovereign rights.

With deposits in Europe dwindling and efforts to reduce reliance on Russia, an untapped gas field off the island of Cyprus has gained attention. But political tension in the region may frustrate the controversial drill. (16.11.2018)

A spate of recent deals and gas finds in the eastern Mediterranean Sea has positioned Egypt to be a major energy hub. Turkey, which is flexing its military muscles, may be left out. (02.04.2018)