The co-mayors of Diyarbakir, known as the "capital" of the mainly Kurdish southeast of Turkey, have been detained on charges of aiding militants. It is part of a crackdown after a year of violence and a failed coup. 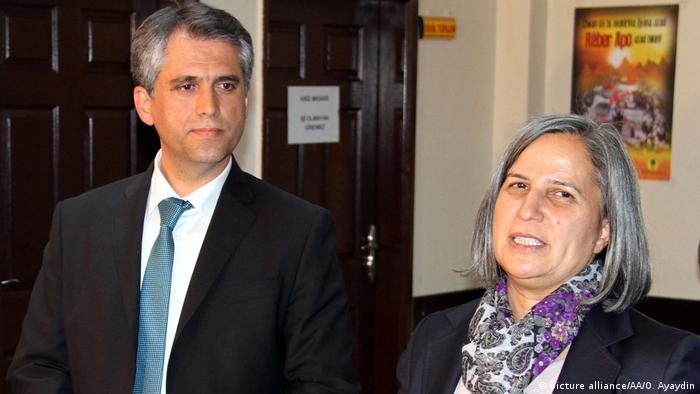 Gulten Kisanak (R) und Firat Anli have both been detained

Anti-terrorism police took Gultan Kisanak into custody late on Tuesday at Diyarbakir airport, while Firat Anli was held at his home, the state-run Anadolu Agency reported. Kisanak is a well-known Kurdish political figure and became Diyarbakir's first female mayor in 2014.

The two co-mayors were detained as part of an ongoing probe into the outlawed Kurdistan Workers' Party (PKK), which Turkey, the European Union and the United States have labelled a "terrorist" group.

Specific charges were that they had aided militants, using municipal vehicles to transport dead bodies, incited violent protests and made speeches in support of the PKK and supporting greater political autonomy for Turkey's estimated 16 million Kurds, the Diyarbakir prosecutor's statement said.

Kisanak is a member of Turkey's pro-Kurdish People's Democratic Party (HDP), which the government accuses of being the political wing of the PKK. The HDP denies this.

The mayor's office was searched, security sources said. The mayor's home was also being searched by police, according to one of Kisanak's aides.

Dozens of police surrounded the town hall with light armored vehicles and trucks loaded with water cannon as officers searched the building, an AFP correspondent reported.

At the invitation of lawmakers, Kisanak had testified earlier on Tuesday at a parliamentary commission in Ankara looking into the failed military coup on July 15. It was not immediately clear whether her testimony was related to the detention order.

President Recep Tayyip Erdogan has said the removal of elected officials and civil servants who have been accused of links to the PKK was a key part of the fight against the armed group.

New administrators close to Erdogan's ruling Justice and Development Party (AKP) were appointed in 24 Kurdish-run municipalities in September after their elected mayors were removed because of suspected links to militants. Those arrests triggered protests across the region.

Tom Stevenson reports from Diyarbakir in southeastern Turkey, where a city and its residents are suffering from the aftermath of a brutal conflict and an overbearing police presence. (16.09.2016)