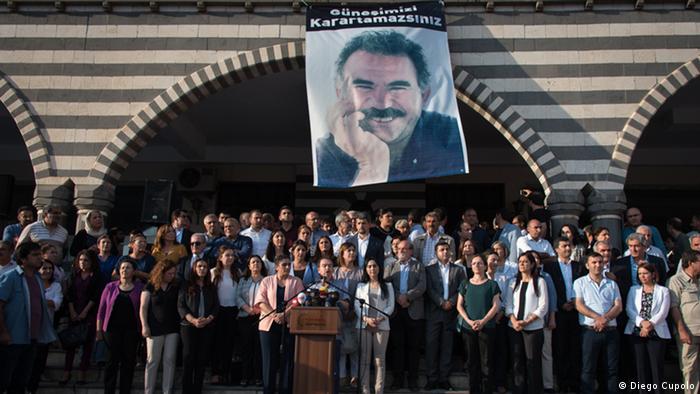 It's been more than one year since anyone's been able to visit or speak with Abdullah Ocalan, founder of the outlawed Kurdistan Workers' Party (PKK).

Citing concerns over his physical health, 50 members of Turkey's leading Kurdish parties announced they would begin a hunger strike if Ocalan's wellbeing could not be independently confirmed by September 5.

Speaking before a crowd in Diyarbakir on Wednesday, Hatip Dicle, co-chair of Democratic Society Congress (DTK), said the last time anyone was able to see Ocalan was April 5, 2015.

“Obstructing a people and a movement and denying all requests to see [Ocalan] for 510 days, especially after the coup attempt, removes all possibilities of peace in the country,” said Dicle, whose speech was repeatedly interrupted by police with megaphones, demanding his delegation remove a banner of Ocalan that was hung as a backdrop to the press conference.

Ocalan has been in solitary confinement on the island of Imrali in Turkey's Marmara Sea since his arrest in 1999. He is held there on terrorist charges for having started an armed struggle against the Turkish government in the 1980s in an effort to establish an independent Kurdish state.

Though not all Kurds agree with his tactics, few will deny his leadership in reawakening the modern Kurdish rights movement and his preeminence in Turkish politics has endured as a result. 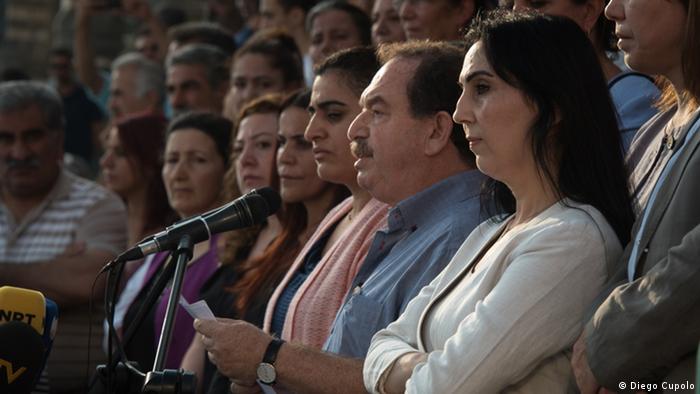 Ocalan has used the time in exile to continue disseminating his messages through a network of lawyers and Kurdish committees. During this period, he gradually moved away from his original calls of violent revolution, towards political solutions in resolving Turkey's long-standing Kurdish Question; or the role ethnic Kurds play in a country where they make up about 20 percent of the population.

Such actions led to the founding of the left-leaning, pro-Kurdish Peoples' Democratic Party (HDP), which is now Turkey's third-largest political party with 11 percent of the electorate. Still, despite positive developments in the peace process and political arena, Ocalan, now 68 years old, has been denied family visits since last spring, and has not met with his lawyers in nearly five years.

The interruption in communications can prove dangerous, according to Mehmet Ali Aslan, HDP MP from the Turkish city of Batman, who said only Ocalan could impose a ceasefire on Kurdish forces operating in the region.

“Millions of people are willing to listen and follow every word he says, not just in Turkey, but in Rojava [Syrian Kurdistan], Iraq, and Iran.” Aslan said. “He is in a position where his words have true power and what he says, is what people will do.”

Without Ocalan's leadership, Aslan said there could be no successful peace negotiations inside Turkey, as well as in newer conflicts between Turkish and Kurdish forces in northern Syria. Aslan expressed worries over Turkey's recent incursion into the Syrian war, saying the military operations could have wide-spanning consequences if not halted immediately.

“I hope [Turkish President Recep Tayyip Erdogan] won't proceed with this madness because it's dangerous for not just Turkey and the Middle East, but for Europe as well,” Aslan said. “If this war continues, there will be three or four times as many refugees heading to Europe's doorstep.”

Aslan's concerns reflect a growing anxiety among many Turkish residents who in the last year have not only seen their armed forces enter Syria, but also experienced a failed coup attempt in July, and ongoing military curfews in the nation's Kurdish-majority southeast.

Such concerns materialized on Wednesday, through a show of unity between Kurdish parties, delegations, civil society organizations and religious leaders during the press conference. Present were chairs and co-chairs of HDP, HDK, People's Democratic Congress (DBP), the Democratic Regions Party (DBP), and DTK, whose party headquarters in Diyarbakir was raided by police hours after the event.

Also present were members of the Free Women's Congress (KJA), who have been leading the call to reinstate communications with Ocalan through their project, “I stand by my leader, my homeland, and my freedom” or “Önderliğime, Toprağa, Özgürlüğe Sahip Çıkıyorum.“

Ayse Acar Basaran, an HDP MP and coordinator of the project, said she began the initiative in June of this year, and the need to confirm Ocalan’s safety has only become greater since the failed coup attempt.

“We tried everything we could, but it’s always a dead end,” Basaran said. “The worse the solitary confinement becomes, the more tense the war becomes. The hunger strike is a call to shake the government back to its senses.”

Basaran reiterated Ocalan’s continued ideological dominance over Kurdish forces, and also said she believed there could be no peace negotiations in Turkey without his participation in the process.

“The road to peace passes through Imrali,” Basaran said, referring to the island where Ocalan is held.