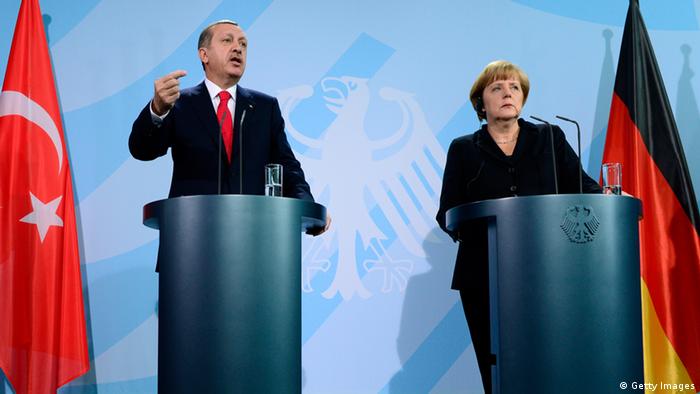 Turkish Prime Minister Erdogan asked Wednesday for German help in grappling with a flood of Syrian refugees, calling the civil war across the border a "catastrophe."

Erdogan told reporters after talks with Chancellor Angela Merkel that Turkey could not manage the influx on its own.

As Turkey's Prime Minister Erdogan visits Berlin, he knows that Turkey is a crucial partner for Germany, both in business and foreign policy terms. But the partnership comes with challenges for both sides. (31.10.2012)

"We absolutely need the support and assistance of Germany," he said. "At a time when we're searching for global peace, this is of course a catastrophe and we have to stop it."

Merkel acknowledged the situation in Syria had become "a real burden" for Turkey and offered "humanitarian aid" to help cope with the tens of thousands fleeing the civil war.

"We feel responsible for the security of Turkey," Merkel said of Germany's NATO partner. She praised what she called Turkey's "restraint" in response to Turkish citizens killed by Syrian fire.

Erdogan's government, a one-time ally of Syrian President Bashar al-Assad, fell out with Damascus after its deadly crackdown on popular dissent that erupted 19 months ago.

Turkeyhas since sheltered more than 105,000 refugees fleeing the conflict, as well as the exiled Syrian opposition's military and political leadership.

Despite her own political party's opposition to full EU membership - a position she noted had been agreed upon by her Christian Democratic Union (CDU) party before she became chancellor, Merkel said she was "open" to discussions on Turkey joining the 27-member bloc.

Erdogan, for his part, confirmed his view that the decision to accept divided Cyprus as an EU member continued to represent a major point of contention in the accession talks, which have been on ice for more than two years.

"Such a state doesn't exist. We recognize North Cyprus as a state though others perhaps don't," Erdogan said. "It was a mistake that South Cyprus was accepted into the EU ... and the mistake keeps growing."

The island is divided between a mainly Turkish north, where Turkish troops are in place, and a mainly ethnic Greek south.