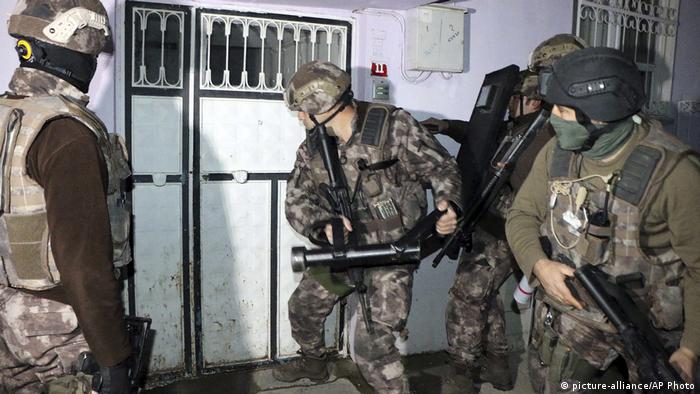 Turkey detained 124 suspected members of the "Islamic State" (IS) group in raids across the country on Monday, state news agency Anadolu reported.

At least 33 foreigners — Iraqi, Syrian and Moroccan nationals — were detained in the capital Ankara in a joint operation by anti-terrorism police and the national intelligence agency.

Police were searching for some 17 other suspects, the report added.

Anadolu said 400 police officers took part in the operation in Batman alone and weapons, ammunition and documents were seized.

Meanwhile, 45 people, including six foreign nationals, were arrested during further raids in the cities of Adana, Kayseri, Samsun and Bursa.

The nationwide sweep took place two months after the death in October of IS leader Abu Bakr al-Baghdadi during a raid by US special forces in northwest Syria, near the Turkish border.

Two days later, Turkish police detained dozens of IS suspects believed to have been plotting an attack around the country's Republic Day celebrations.

Turkey is still reeling from a spate of attacks in 2015 and 2016 blamed on IS and Kurdish militants that killed over 300 people. The violence culminated in the 2017 New Year's Eve massacre of 39 people at an Istanbul nightclub, claimed by IS.

Turkish authorities have stepped up raids on IS militants in recent months, seeking to return them to their countries of origin. Some 20 suspected IS members were arrested in Istanbul last week.

Ankara says it will have repatriated most of the detainees to their home countries by the end of the year.

Turkey has complained that several European countries have been too slow to take back their citizens who travelled to Syria and Iraq to join IS.

NATO has, meanwhile, raised concerns that Turkey's offensive into northeastern Syria in October against the Kurdish YPG militia could have allowed IS suspects to escape from prisons and camps run by the YPG.