After years of authoritarian rule, Tunisia has inaugurated its first freely elected president. Beji Caid Essibsi has long held office in Tunis, but insists his administration will not be a continuation of the past. 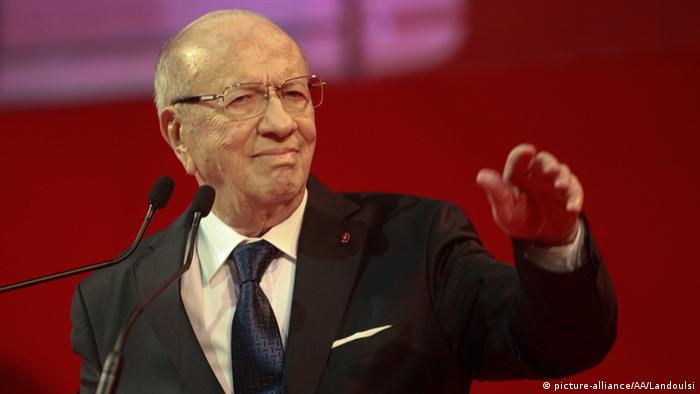 Beji Caid Essebsi was sworn in as president of Tunisia on Wednesday in a plenary session of parliament, where his secularist Nida Tounes party holds the largest bloc of seats.

Essebsi is the first democratically elected head of state in the north African country since it gained independence from France in 1956. The 88-year-old veteran of Tunisian politics won 55.68 percent of the votes cast in a run-off election on December 21.

After his swearing-in ceremony was compete, Essebsi was to travel to the presidential palace in Carthage, a suburb of Tunis, for a formal hand over of power from former President Moncef Marouki.

Nida Tounes defeated rival moderate Islamist party Ennahda, to which Marzouki belongs. Marzouki received 44.32 percent of the vote, and his party said it had not ruled out joining a coalition government coming second in the October parliamentary vote.

A 'president for all Tunisians'

Tunisia had only two heads of state between gaing its independence from French colonial rule in 1957 and its revolution nearly four years ago. Habib Bourguiba, a nationalist leader who spearheaded the nation's independence, ruled Tunisia as president for 30 years, before Zine El Abidine Ben Ali, who was overthrown in the Arab spring revolts in 2011 took power. Essebsi served under both, and has been accused by his detractors as being an extension of the Ben Ali regime.

Essebsi has denied these accusations, saying he would be a "president for all Tunisians," adding that Tunisia had turned a page on the past and should look to the future.

Tunisia is the birthplace of the Arab Spring and largely considered its sole success story. Similar uprisings in Libya, Syria, and Yemen have all led to protracted conflicts, while Egypt saw its elected leader, Islamist President Mohammed Morsi, deposed by the army after a year in power.