Anti-Islamist Beji Caid Essebsi has won Tunisia's presidential election with over 55 percent of the vote, according to the electoral commission. 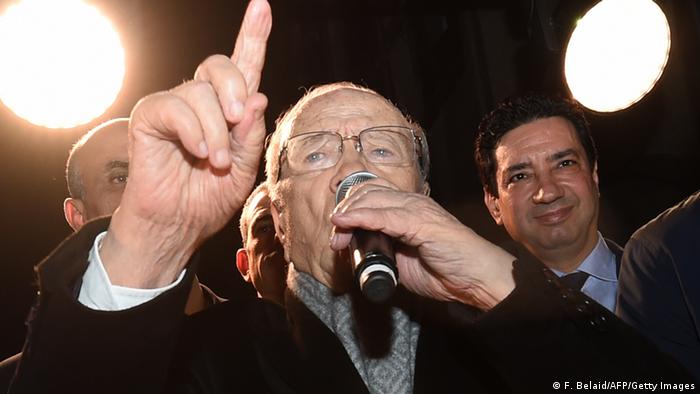 Essebsi (pictured above), an 88-year-old political veteran, will be the first freely elected president since the country gained independence from France over a half century ago.

The election is seen as a landmark for democracy in the North African nation where the Arab Spring was born, and it sets Tunisia apart from its neighbors such as Egypt and Libya where turmoil persists despite popular up risings that toppled dictators Hosni Mubarak and Moammar Gadhafi, respectively, in 2011.

Essebsi took 39 percent in the first round of voting on November 23, six percentage points ahead of 69-year-old former rights activist Marzouki, who was installed by parliament two months after polls in December 2011.

The recent campaign was marked by obstinate mudslinging, with Essebsi refusing to debate with Marzouki and calling his opponent an "extremist."

Essebsi insists that Marzouki represents Islamists, and says they have "ruined" the country since the 2011 revolution which toppled veteran ruler Zine El Abidine Ben Ali and sparked the Arab Spring.

Marzouki, in turn, has accused Essebsi of wanting to restore the old guard deposed in the revolution.

Indeed, Essebsi is no stranger to Tunisian politics, having served as a high-ranking official both under the founder of independent Tunisia, Habib Bourguiba, and his successor, Ben Ali.

After Ben Ali's ouster, the moderate Islamist party Ennahda dominated politics in Tunisia but was unable to meet the challenges posed by an ailing economy and political unrest, including terrorist attacks.

Essebsi formed his secular Nida Tunis coalition to oppose the Islamists. He is now poised to consolidate power, as Nida Tunis came out on top in October's parliamentary election. This has led to some concerns of a return to an authoritarian style of government in Tunis.

Essebsi leads in first round of Tunisia vote

Tunisian presidential candidate Beji Caid Essebsi is leading by six percentage points against incumbent Moncef Marzouki. Since neither candidate won a majority of the votes, they will face off in a run-off election. (25.11.2014)