A clause in Tunisia's draft constitution has sparked uproar and concerns that women's rights are under threat. Some Tunisian women are fighting back. 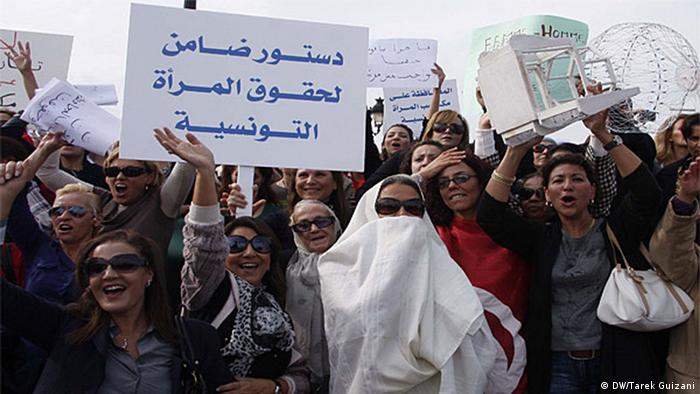 When Tunisia's National Constitutional Assembly published the new draft constitution earlier this year, its references to women provoked outrage. One article stipulated that the roles of men and women "should complement each other within the household."

For decades, women in the North African nation have enjoyed some of the most far-reaching rights in the Arab world. Many have successful careers in business and politics. For example, women account for nearly half the lawmakers in the ruling Islamist Ennahda party. But some women now perceive the new definition of gender roles as a threat to their freedoms.

'An open door' to rights abuse

One of these opponents is Selma Rekik, who runs a family business near Tunis that specializes in automobile cables and food processing. So far, she has always felt comfortable operating in sectors traditionally dominated by men.

"Sometimes when you start a new project [as a woman], people might be a bit wary," said Rekik. "But that changes as soon as you assert yourself, you show that you're efficient. I've been respected because the results have been good. In Tunisia, I haven't had any problems."

But the problematic clause in the constitution could change this. Thousands took to the streets in protest when it was made public in August. 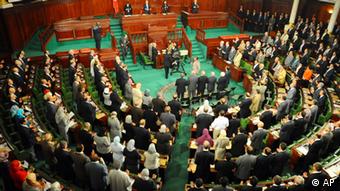 The ruling Ennahda party has been described as 'moderate Islamist'

"Lawyers who have interpreted this article consider it an open door to other excesses that can compromise women's rights," said Rekik.

Rekik acknowledged she came from a privileged family where male and female members were treated equally. But she also saw other Tunisian women asserting themselves across the workforce. Many of her factory's employees are women - as are the farmers working for her food processing company.

"Very often, it's the women who work to pay for their children's food and clothing and their education. They're the element of stability in the family."

Rights activists like Khadija Cherif blame the Ennahda party, which inserted the offending paragraph, for going back on campaign promises to uphold women's rights. She believes more hard-line Islamists will twist the vague legal wording to suit their interests.

"It threatens equality," said Cherif. "Because when you talk about 'complementarity,' it could mean barring women from work - because it could mean that men work and women stay at home. It could even mean a return to polygamy."

Already, according to Cherif, women and even young girls are being pressured to wear the hijab, which used to be a rare sight on Tunisia's streets.

"In three different places, the constitution states that equality between men and women is guaranteed," Ghannouchi told DW. "In the fourth place, there is a reference to complementarity. While there is complementarity between women and men in the family setting, it doesn't mean one is better than the other, or has more rights or responsibilities." 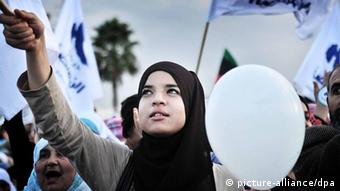 In fact, more conservative Tunisian women, like university student Hajer Ben Jemaa, argue that they have more rights today than before the revolution, because they can assert their religious beliefs.

"Today in Tunisia, I'm free to wear this hijab," said Ben Jemaa. "I don't have problems with the police or at school. With Ennahda I have hope."

For her part, Rekik believes Tunisian women should be free to wear what they want. But she is not waiting for politicians to determine her future. Earlier this year, she helped to establish a new, secular party - Call of Tunisia (Nidaa Tounes) - founded by former prime minister Beji Caid el Sebsi.

"If I'm getting into politics now, it's because I want to fight for what we have achieved as women, as Tunisians," said Rekik. "I accept difference - the debate of ideas. But not regression - not rolling back women's rights."

Call of Tunisia is off to a good start. A recent poll placed the party second behind Ennahda, with 20 percent of Tunisians backing it.

Press freedom is under pressure in Tunisia

Journalists in Tunisia have gone on strike for the first time since the country won its independence. They accuse the government of restricting freedom of speech. Is press freedom in danger after the revolution? (18.10.2012)

Tunisia's ruling coalition says it has agreed to hold presidential and parliamentary elections on June 23 next year. It says the president will be directly chosen by voters. (14.10.2012)

Hundreds of Tunisian activists are protesting in support of a woman who was allegedly raped by police and is facing indecency charges. The case is seen as a broader attack on women's rights in this Muslim country. (02.10.2012)