Tunisia sees signs of a counter-revolution | World| Breaking news and perspectives from around the globe | DW | 11.05.2011

Tunisia sees signs of a counter-revolution

For months Tunisians have suspected that loyalists to the former dictator they toppled remain influential in politics. Now, they believe they have proof of it, and are taking to the streets once again. 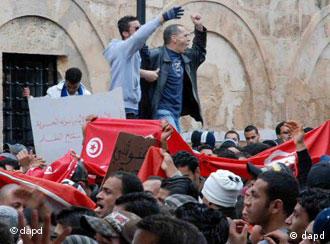 Protesters say the old regime has launched a counter-revolution

Scenes of young men rioting and getting charged by police in Tunis may recall the revolution in January that toppled a dictator, Zine El Abidine Ben Ali. But they're happening now, in a country that's rising in protest against the government it put in place to assure that revolution's goals.

Recent demonstrations generally go like this: angry protestors march down Avenue Habib Bourguiba, Tunis' main thoroughfare; then riot police fire tear gas and start charging; and what was once a river of humanity becomes a vacant street within seconds.

"Traumatized, I'm traumatized," yelled Majid Saidi, amid a crowd of thousands, all out protesting what they say is a counter-revolution being launched by government figures loyal to Ben Ali, "We never saw this kind of thing under Bourguiba (former president - ed.), nor under Ben Ali - not even under the French!"

The controversy blew up when a video appeared on Facebook last week. In it, former Interior Minister Farhat Rajhi, a highly trusted public figure in Tunisia, states that Ben Ali loyalists still hold sway in the political sphere and that they are planning a military coup, depending on the results of July's election.

Whether Mr Rahji's accusations are true or not are almost immaterial in paranoid post-revolution Tunisia. They became a political bombshell because they were confirmation, coming from a highly respected former public figure, of suspicions already harbored by many, such as Imen Megri. 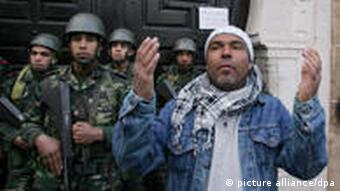 Megri runs along a side street from Avenue Bourguiba, trying to escape the tear gas and riot police, flanked by her friend Fatima, who would only go by her first name. She has come out with clear demands: get rid of any remaining influence of the Constitutional Democratic Rally (RCD), Ben Ali's now defunct party.

"We're sick of these people," Fatima yells as she shuffles along the narrow street. "We want to be in peace - they should get the hell out of here."

With these new protests and police crackdowns comes a return of state practices Tunisians thought were in the past: internet censorship and police beatings of journalists.

"First he tried to grab my phone from me and my camera," says radio journalist Marwa Rekik, who says she was accosted by a policeman while covering the protests. "He hit me on the head - I have five stitches on my head."

Rekik's legs are covered in bruises she says were sustained from police batons in the same attack. Some 14 journalists say they were subject to police beatings during these protests.

For its part, the government declined to comment for this story, but in a nationally televised interview Sunday night, Prime Minister Beji Caid Sebsi denied a counter-revolution is underway, calling former Interior Minister Farhat Rajhi a liar. He also said the beating of journalists was a police mistake, something journalist Rekik finds hard to believe.

"Fourteen journalists were attacked, not just one," she says. "They could say they took me for a citizen but there were fourteen of us and each of us said we were journalists."

The optimism and euphoria of January's revolution has given way to a distinct sense of paranoia and dread in Tunisia. People here say the revolution is not over yet and that its goals are far from being assured. All they can do for the moment, is continue the fight.

"We aren't here for bread or for higher salaries - we simply want our dignity," says protestor Houdi Ben Aisha, who carries a placard reading 'No Justice, No Peace' on Avenue Habib Bourguiba. "We must never, never, never let go."