The Ennahda party has claimed a win over its rival, Nidaa Tounes, in local elections. But voter turnout was just 33.7 percent, with an analyst saying despair among young Tunisians is "very serious for democracy." 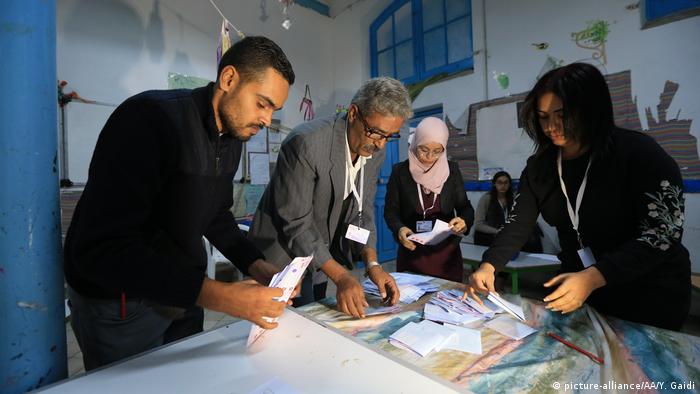 Initial forecasts from Tunisia's municipal elections — the first since the 2011 Arab Spring uprising and held Sunday after being delayed four times due to logistical, administrative and political issues — put the Islamist Ennahdha movement ahead with 27.5 percent of the vote.

The secular Nidaa Tounes party of President Beji Caid Essebsi reportedly came in second at 22.5 percent, according to a poll by marketing research company Sigma Conseil. 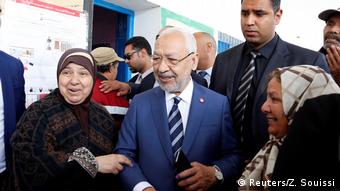 Ghannouchi said his party was willing to cooperate with all others, regardless of size

"These polls send a strong message that the Tunisian democracy is alive," said Ennahdha's leader Rached Ghannouchi, whose party governs jointly with Nidaa Tounes at the national level.

Turnout, however, was at only 33.7 percent of the 5.3 million eligible voters, according to Tunisia's ISIE electoral commission.

Elections 'no longer source of change'

Rafik Halouani, head of the election monitoring agency Mourakiboun, said young Tunisians seemed to "no longer believe in elections as a source of change, which is very serious for democracy."

Sunday's voting in 350 municipalities, involving 57,000 candidates, has been touted as another milestone on Tunisia's road to democracy, introducing a new generation to public office ahead of parliamentary and presidential votes in 2019.

In many localities, independents campaigned on separate lists against established parties.

Young voters in Tunis were notably absent at polling stations. Pre-Sunday polling among security forces resulted in a participation rate of only 12 percent.

Unemployed graduate Kamilia Mlouki, 23, told the Agence France-Presse news agency that she had her "right" to vote by casting a blank ballot. "I have no more faith in any political party or electoral list."

"These municipal elections won't change anything for us," 34-year-old housewife Hilma told AFP.

"I want a job," said a young man who gave his name as Ramzi, speaking with Reuters. "No one cared for us in the past years and we suffer from unemployment."

At one polling station in the southern Saharan town of Borj el-Khadra not a single voter appeared, according to electoral sources quoted by the German news agency dpa.

By mid-afternoon local time, voter turnout overall was put at only 21 percent. Monitors spoke of violations in two towns in the Gafsa region, including attempts at vote buying and ballot urns being broken open.

At Mdhila in Tunisia's south, electoral officials decided to postpone polling in eight centers because of a mistake in elections papers, Reuters reported.

A 124-member EU observer mission said no major irregularities had been noted.

Western donors are reportedly ready to provide funds to local councils, but this will hinge on central government allocations under a new law intended to gradually devolve decision-making to the local level.

Billions of dollars in loans have already been contributed via the International Monetary Fund and various countries to help plug budget deficits and one of the world's highest public sector bills.

Some 60,000 security personnel had been deployed to protect Sunday's vote, with memories still fresh of extremist attacks on tourist sites and the presidential guard in 2015.

More than 36,000 soldiers and police officers have registered to vote in the first local elections since the Arab Spring. But some police unions have pushed back, saying security forces should remain "neutral." (29.04.2018)