Leading US Republican presidential candidate Donald Trump has received a lukewarm response from pro-Israeli advocates. The mogul toned down his fiery rhetoric for the annual AIPAC conference. 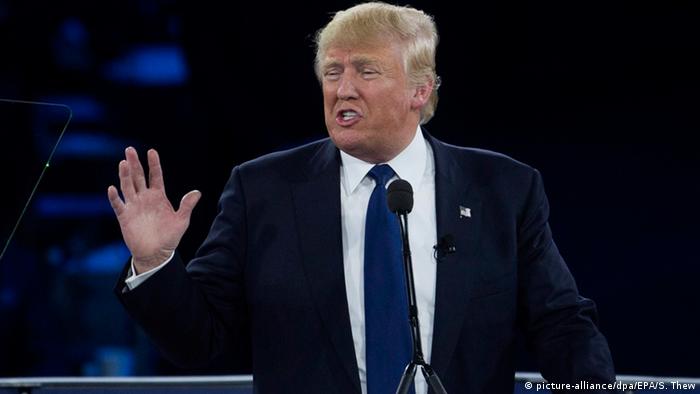 In a speech to an influential pro-Israel lobby on Monday, Republican presidential candidate Donald Trump vowed to take apart the Iran nuclear deal and strengthen ties with Jerusalem.

At the meeting of the American Israel Public Affairs Committee (AIPAC), Trump also promised to push back against United Nations interference in Israeli interests.

"My number one priority is to dismantle the disastrous deal with Iran," said the Republican front-runner. In a change from his usual firebrand off-the-cuff speeches, Trump made the unconventional decision to read from a teleprompter at Monday's event.

According to DW's Richard Walker, the real estate mogul's assertion that he had studied the Iran deal more than anyone else garnered a degree of derision from spectators, but they warmed to him when he promised to revoke the agreement.

"I have been in business a long time. I know deal making. And let me tell you, this deal is catastrophic. For America, for Israel and for the whole of the Middle East," Trump said.

He then reaffirmed his commitment to side with Israel in peace negotiations with Palestine, promising to resist UN attempts to pressure Israel.

"The Palestinians must come to the table knowing that the bond between the United States and Israel is unbreakable," he said.

Shortly before addressing the AIPAC event, Trump told an CNN interviewer that he would also move the US embassy to Jerusalem and cut American funding to NATO.

"We are paying disproportionately. It's too much and frankly it's a different world than it was when we originally conceived of the idea," he said. "We have to reconsider. Keep NATO, but maybe we have to pay a lot less toward NATO itself."

Trump even went so far as to say he'd work closer with Russian President Vladimir Putin, whose authoritarian policies in eastern Ukraine have seen tensions with NATO reach their most dire level since the end of the Cold War.

US President Barack Obama has arrived in Cuba for the start of a key visit and meetings with President Raul Castro. The diplomatic opening is intended to be the centerpiece of Obama's presidential legacy. (21.03.2016)

More than 20 protesters parked cars in the middle of a road leading to a Trump rally at Fountain Hill, Arizona. In New York, a thousand demonstrators gathered outside Trump Tower to denounce his campaign. (20.03.2016)