The Trump administration has made its first move against the Environmental Protection Agency. An order to freeze new contracts coincided with a request to suspend media communication. 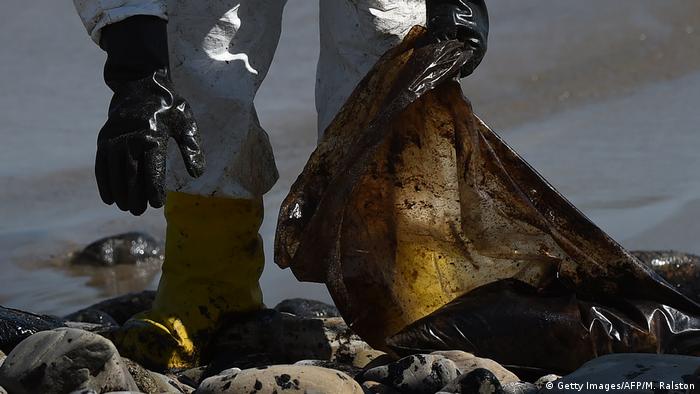 President Donald Trump's has ordered the Environmental Protection Agency (EPA) to temporarily freeze all contracts and grants, in a sign his administration will follow through on campaign promises to slash environmental regulations.

It was unclear if the order was for existing or only future contracts at the EPA, which is responsible for environmental and health protection. The EPA awards and manages several billion dollars of grants every year, ranging from environmental testing to cleanups and research. The order also halts task orders or work assignments to contractors.

The White House also asked the agency to stop issuing press releases, writing blog updates or posting on social media. The request extended to halting contacts with the press, raising concerns the Trump administration is trying to restrict the public's access to information about changes at the agency. Similar orders landed in staff inboxes on Tuesday at the Department of Agriculture and the Interior Department, which manages federal land in the US.

The restrictions at the EPA came as Trump issued an executive order on Monday temporarily halting all government hiring, except for the military.

On Tuesday, Trump issued executive orders to advance construction of the Keystone XL and Dakota Access pipelines, both blocked by the Obama administration on environmental grounds.

Trump has vowed to remove environmental regulations in order to promote more energy production and mining. In the "America First Energy Plan" published on the White House website after last Friday's inauguration, the new administration said it would "refocus the EPA on its essential mission of protecting our air and water."

"For too long, we've been held back by burdensome regulations on our energy industry," the White House policy says. It calls for expanding oil, gas and shale drilling as well as "reviving America's coal industry."

Trump has brought in people from the energy industry lobby to run key positions within the EPA, according to a list seen by Reuters on Monday. Among a 10-member team being brought in are at least three former researchers from think tanks funded by the billionaire industrialist Koch brothers and a former mining industry lobbyist. A number of the others are against US efforts to combat climate change.

Trump's nominee to head the EPA, Oklahoma Attorney General Scott Pruitt, has expressed doubts humans are behind climate change and is against environmental regulations that hurt economic development. He repeatedly sued the EPA during his time as Oklahoma's chief prosecutor.

Trump pick for EPA admits global warming is not a hoax

Environmentalists have launched an aggressive campaign to block his nomination, pointing to his deep ties to energy companies. He has received tens of thousands of dollars in campaign contributions from these firms. (18.01.2017)

Swiss on course to pass Muslim 'burqa ban' 3h ago