US President Trump has told survivors and relatives of the Florida school shooting that he will consider arming teachers. He also pledged to introduce mental health and age checks for gun buyers.

As students staged walkouts across the United States on Wednesday to protest against gun violence, US President Donald Trump gave his support to the idea of giving weapons training to teachers and other staff in an attempt to prevent school shootings.

Speaking a week after a lone gunman went on a rampage, killing 17 people at a Florida high school, Trump said he was considering backing proposals to introduce concealed weapons that would allow certain school employees to respond in the event of an emergency.

He said the proposal could "solve the problem" by making potential attackers think twice.

No more gun-free zones around schools

"This would only be, obviously, for people who are very adept at handling a gun," Trump said. "It's called concealed carry. Where a teacher would have a concealed gun on them, they would go for special training and they would be there, and you would no longer have a gun-free zone."

Trump spoke at the end of an emotional meeting at the White House, where students and relatives of the victims of last week's mass shooting gathered to describe their personal anguish and urged US lawmakers to protect students from gun violence.

The president also reiterated his call for more stringent checks on gun buyers, with a "very strong emphasis on the mental health of somebody," and said he would "go very strong" on the age of buyers of guns.

"It's not going to be talk like it has been in the past," he vowed.

Trump's remarks came a day after he ordered a ban on bump stock gun modifications, used to make semi-automatic rifles fire like automatic weapons. A bump stock was used in a mass shooting in Las Vegas in October 2017, which killed 58 people.

The US leader and Vice President Mike Pence listened as several students and parents described their anger and sorrow following the February 14 tragedy at the Marjory Stoneman Douglas High School in Parkland, Florida. 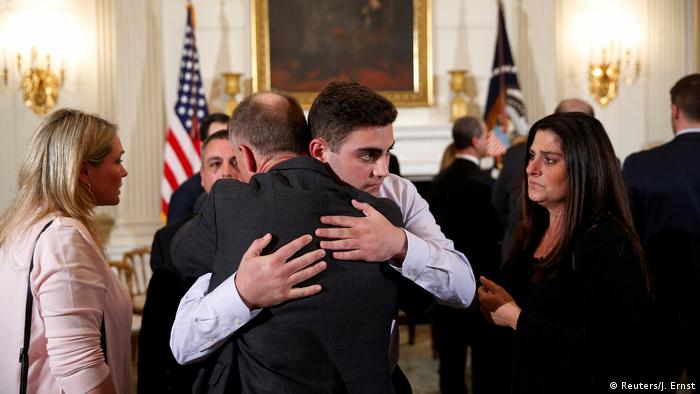 Julia Cordover, one of the school's senior class presidents, fought back tears as she told Trump that she hoped "no person in this world will ever have to go through" a similar mass shooting again.

"I was lucky enough to come home from school unlike some of my other class, and it's very scary knowing that a lot of people did not have this opportunity to be here," she said.

Another student, Samuel Zeif, described how he turned 18 the day after the shooting: "Woke up to the news that my best friend was gone. And I don't understand why I can still go in a store and buy a weapon of war."

In the United States, most 18-year-olds can purchase a rifle. Federal law prohibits people under 21 from buying handguns from licensed dealers. The legal age for purchasing alcohol is 21.

The National Rifle Association said efforts to raise the age requirement for rifle and shotgun purchases would deprive young Americans their right to self-protection.

There was visible anger from several parents, including Andrew Pollack, whose 18-year-old daughter, Meadow, was among the victims.

"I'm here because my daughter has no voice. She was murdered last week and she was taken from us, shot nine times on the third floor. We as a country failed our children. This shouldn't happen," Pollack said.

He denounced tight airport security that means he "can't get on a plane with a bottle of water" but that "we leave some animal to walk into a school." He then yelled at Trump to "fix it!"

Nearly 1,400 kilometers (867 miles) away in Florida's state capital, Tallahassee, thousands of student protesters gathered at the Florida Statehouse calling for changes to gun laws, a ban on assault-type weapons and improved care for the mentally ill.

Teenagers from at least a dozen South Florida schools walked out of class in a similar protest and to commemorate the shooting victims, some of which were captured in images on social media.

US media described similar smaller rallies by students from Maine to Arizona, with students saying they were taking action because Congress had failed to protect schools.

More walkouts are already being planned for March 14, a month after the Florida shooting.

US students protest against gun violence

Thousands of students across the US have walked out of class to protest gun violence in the wake of a school shooting. But not all educators have shown support for the students, with some warning of disciplinary action. (22.02.2018)