Trump nominates Exxon's Rex Tillerson as US Secretary of State

US President-elect Donald Trump has picked ExxonMobil CEO Rex Tillerson to be the next secretary of state. Trump praised Tillerson's "deep understanding of geopolitics" but critics have decried his ties with Russia. 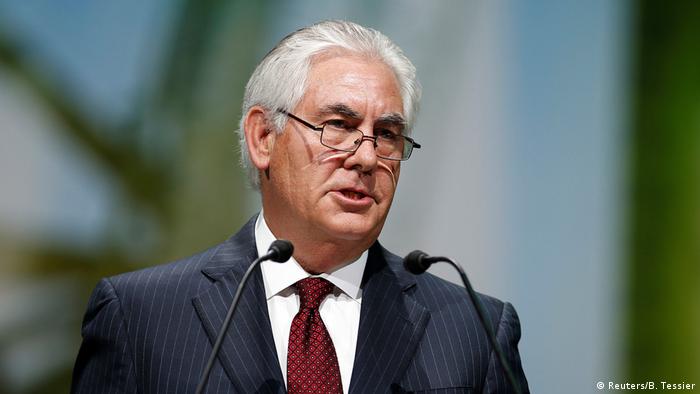 "His tenacity, broad experience and deep understanding of geopolitics make him an excellent choice for Secretary of State," Trump said in a statement released by his transition team.

Trump praised Tillerson's business acumen and called his career "the embodiment of the American dream."

"Rex knows how to manage a global enterprise, which is crucial to running a successful State Department," Trump said.

Washington's pending top diplomat said in a statement he would focus on strengthening international alliances while "enhancing the strength, security and sovereignty of the United States."

The 64-year-old oil magnate and Texan became CEO of Exxon in 2006. Tillerson is expected to face strong resistance during his Senate confirmation hearing, as lawmakers from both parties have pointed out Tillerson's lack of experience in formal foreign policy, his potential conflicts of interest as well as his close ties with Russian President Vladimir Putin.

In the 1990s, he represented Exxon's interests in Russia and has opposed sanctions against Moscow. Tillerson was also awarded Russia's Order of Friendship by Putin in 2013.

The announcement of his nomination comes just days after a CIA report accused Russia of interfering with the US election in favor of Trump. As many Republican and Democrat lawmakers have supported calls for an investigation, the development could complicate Tillerson's confirmation.

Russia welcomed the appointment on Tuesday, with Russian Foreign Minister Sergey Lavrov saying Moscow "expect that his pragmatism will be a good foundation for building a mutually beneficial cooperation" between the two nations.

A senior Kremlin aide said that Tillerson "is known to everyone", not just Putin. He added that other Russian officials have "good, business-like relations" with the Exxon CEO.

Coronavirus: Most Germans support stricter controls for New Year's, but not Christmas 50m ago

Vienna: Iraqi jailed for life over attacks on German ICE trains 59m ago