Around 300 people gathered in Zagreb under heavy police security for Croatia's first-ever transgender and intersex march. Among other requests, protesters demand the country take a stronger stand against fascism. 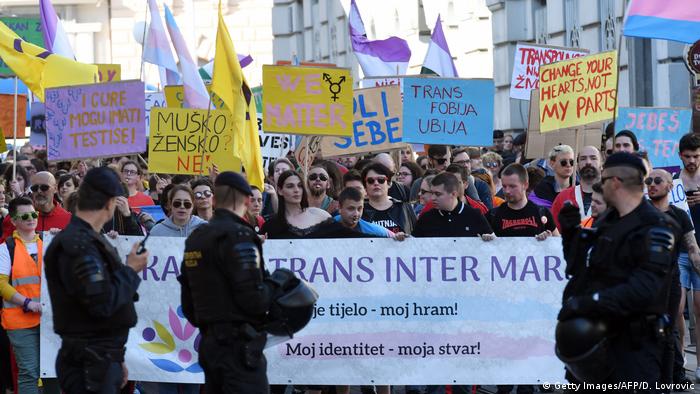 A transgender and intersex march drew around 300 protesters in Zagreb, Croatia, with visitors from Germany, the UK, Switzerland, and across the Balkans attending the event on Saturday.

The demo, dubbed by the organizers as "Balkan Trans Inter March," marks the first time this kind of public rally has been held in the region.

Protesters held up placards reading "Keep out of my pants" and "Respect our pronouns" at the march held under the slogan "My Body — My Temple! My Identity — My Business."

Despite being an EU member, Croatia remains socially conservative and the local Catholic Church wields a powerful influence in society. The state has faced growing criticism for courting radical nationalists and glossing over the crimes of the Ustasha, Croatian WWII forces allied with Nazi Germany. 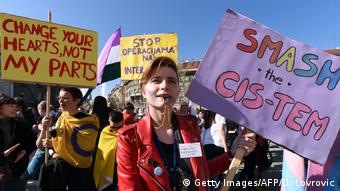 Ahead of the Saturday march, organizers said one of their goals was for the state to take a "clear stance in fighting against growing fascism."

"Seeing how transgender and intersex people are among the main targets of fascist groups … we have decided to show our movement and send clear messages of pride and defiance," activists from the local Transaid group said in a statement.

Read more: Neo-fascism on the rise in Croatia, Council of Europe finds

The protesters also demand legal changes to boost the rights of the discriminated groups that would bring local laws more in line with EU regulations, according to the Index.hr news outlet.

Some of the demands include simplifying the procedure for changing documents and respecting bodily integrity for intersex babies and children. Others asks for "adequate, timely, and efficient" action against hate crimes and hate speech.

No violent incidents were reported during Saturday's event.