German Chancellor Angela Merkel has kicked off her seventh official trip to China with a visit to the city of Chengdu. A number of deals are expected to be signed by major German firms during her three-day stay. 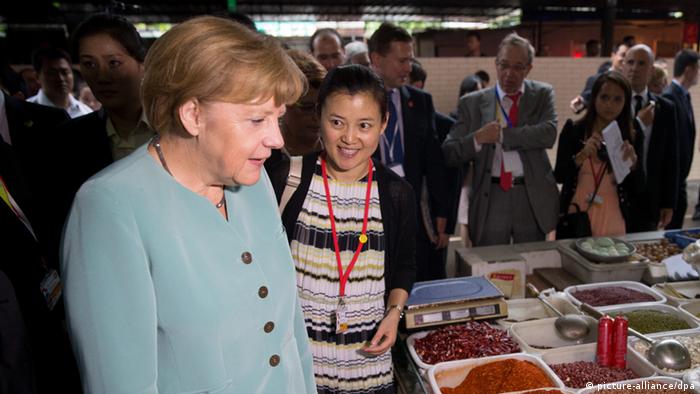 Merkel arrived in the southwestern city of Chengdu early on Sunday, meeting with local officials at an urban forum, visiting a market (photo above), and touring the FAW-Volkswagen factory, where she was hosted by Volkswagen CEO Martin Winterkorn and FAW group CEO Xu Jianyi.

The chancellor also visited a social-welfare agency that aims to help migrant workers and their children, who often have problems integrating into Chinese society. The project was initiated by Professor Zhang Wei, who studied and worked in Germany.

Merkel is due to arrive later on Sunday in the capital, Beijing, where she will meet Premier Li Keqiang for dinner.

Trade will be the main priority during Merkel's visit, the chancellor having in tow a high-powered business delegation, which German media say includes Siemens, VW, Airbus, Lufthansa and Deutsche Bank.

Germany and China: A special relationship?

How much China means to Germany is obvious given the number of trips Chancellor Merkel has made to the country: seven. But that number also shows just how hard it is to deal with the increasingly assertive Asian giant. (04.07.2014)

After the European Union as a whole, China is Germany's third-largest trading partner, behind the US at number two. In 2013, German companies sold goods worth 67 billion euros ($91 billion) to the Asian giant. Imports from China totalled more than 73 billion euros.

The question of human rights in China is likely to play a secondary role, though government sources have said Merkel will discuss the topic both with Li and President Xi Jinping, whom she is to meet on Monday in Beijing.

German officials have argued that closed-door discussions can be more effective in China than open reprimands.

Merkel is expected to hold a joint press conference on Monday with Li and will also attend the China-Germany Economic and Trade Commission before meeting President Xi Jinping.

On Tuesday she will hold a talk at Beijing's Tsinghua University before departing for Berlin.