Germans spent more money than ever before on fair-trade products in 2014, a leading advocacy organization has said. Among the best-selling items were coffee and bananas, but also roses, flowers and cocoa.

Fair trade on the rise

German consumers spent a total of 827 million euros ($922 million) on wares such as coffee, bananas, flowers and cocoa that came from producers in the southern Hemisphere who paid their employees fair wages and didn't subject them to inhumane working conditions, a leading advocacy organization said on Monday in Berlin.

That number was up from 173 million euros spent on fair-trade products the year before - a 26 percent rise and the most significant year-on-year jump since the non-profit organization TransFair began keeping track in 1992. On average, Germany's 80.2 million people spend around 10 euros per person on fair-trade products. 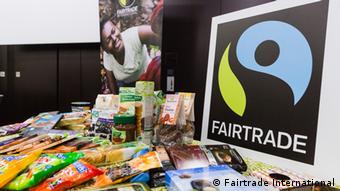 The rise was attributed to growing familiarity with the TransFair brand. Companies that earn TransFair's stamp of approval are allowed and encouraged to display the organization's easily recognizable logo, a blue and green circle with a black swath cutting through the middle. (Think abstract ying-yang.)

People don't have much time for grocery shopping and before you know it the grocery cart is full. That's why it's important for fair-trade products to be displayed more prominently," said Dieter Overath, chief executive of TransFair.

Germany is the world's largest market for at least one fairly traded product - roses. Twenty-five percent of all of the world's roses bearing the fair-trade stamp of approval are sold in Germany, TransFair said at its annual press conference in Berlin.

Even so, of all the fairly traded products in the world, fair-trade coffee is still the frontrunner. In 2014, 13,020 tons were sold - an 18-percent increase on the year.

"Coffee is the DNA of fair trade," Overath said.

Fair trade on the rise