Tracking NATO on the Libyan battlefield | World| Breaking news and perspectives from around the globe | DW | 16.09.2011

Tracking NATO on the Libyan battlefield

As rebels together with NATO air support attempt to flush out the last pockets of Gadhafi-led resistance, NATO's military campaign in Libya is once again becoming the focus of intense scrutiny. 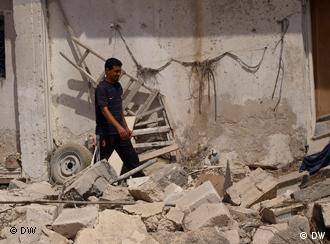 "The whole street had been obliterated: cars, buildings, everything was in flames," Abdul Basser Richi recalls. The 30-year-old Tripoli resident was lucky enough to survive one of NATO's "surgical" bombings in the early morning of June 19.

But the destruction at Richi's family house - where he lived with his parents and his nine brothers - still pays brutal witness to something a NATO official considered afterwards as a "mistake due to a weapons system failure." That was the third admission by the alliance that they had hit an unintended target.

None of Richi's relatives were injured that night. His neighbor, Ali Garari, wasn't so lucky. The 70-year old lost six relatives under the fallen concrete debris of his house.

The majority of the residents in Harada district - east of Tripoli - are convinced that NATO was targeting a "secret" house where Saif al Islam - Gadhafi's second son - was allegedly hiding. But the bombs hit Ali Garari's instead.

"Gadhafi's government gave Ali a new car in compensation and he left afterwards but we don´t know where," neighbors told Deutsche Welle.

Victims of the NATO bombings seem to be among the "forgotten" ones in the ongoing Libyan conflict. The coalition does not have a public representative in Tripoli and has not commented on the campaign. There are no figures for NATO's victims, and neither the international coalition nor the National Transition Council - Libya's de facto leadership - have addressed them so far.

On August 2, Amnesty International wrote to NATO Secretary General Anders Fogh Rasmussen asking for clarification about incidents in June in which unarmed civilians were reportedly killed and injured in Tripoli.

Since March 2011, the humanitarian organization says it has repeatedly requested access to territories formerly under the control of Gadhafi's forces in order to investigate allegations of human rights violations and violations of international humanitarian law. These included the sites of NATO bombings where civilian casualties have been reported. The organization says it has received no response. 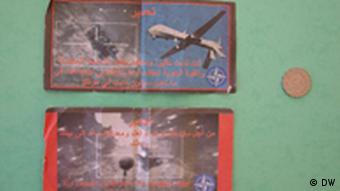 Since NATO started its air operations last March, the alliance has also been flooding Libya's capital with leaflets designed to undermine the morale of Gadhafi's troops.

In the first one, amid gross caricatures of Gadhafi and sobbing followers, NATO requests the Libyan army to "refrain from carrying out Gadhafi's orders and committing crimes against the Libyan people," adding that "any officer or soldier who commits crimes against humanity shall be in violation of International Law."

The message may not be as elaborate in the second flyer but it is just as eloquent. The leaflet boasts a drone next to a view of a tank and issues a stark warning:

"Warning: You are neither a match nor an equivalent to the superior weapon systems and air force of NATO. Continuing to do what you are doing will result in your death." The flip side shows a blown-up tank up next to yet another promise of death.

Considering how many civilians have been killed by drones in Afghanistan and Pakistan, it may come as a paradox to many that NATO is using the symbol of this silent and windowless aircraft in a campaign meant to protect the civilian population.

In addition to both air military and propaganda operations, it has also been tacitly acknowledged that foreign military advisers were on the ground in Libya as early as April.

Fighters in Nalut - a Berber village in Libya's western mountains - repeatedly told Deutsche Welle over the past three months about the presence of three foreign military officers - "two French and an American" - allegedly based at Nalut's rebel military headquarters. Unlike other rebel military bases in Zintan and Jadu, also in the Nafusa mountains, Deutsche Welle was denied access to the base in Nalut and was thus unable to confirm such claims. 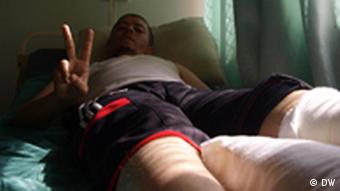 In a rare interview with one of their commanders conducted at the village's hospital, Deutsche Welle heard of other "ground operations" likely to have taken place on Libyan soil and under a "foreign" signature.

"There was an Irish journalist with us from the very beginning who was always escorted by four men," Tripoli Brigade commander Fituri Ali Sahad told Deutsche Welle.

"He joined us on every single operation against Gadhafi's troops. He was in constant communication with his newspaper through a satellite phone during the attacks. He told us he didn't speak any Arabic so we couldn't talk to each other. In the end it was more than obvious to me that he had a military background," recalled the 29-year-old fighter recovering in bed from a bullet wound.

NATO has firmly denied having troops on Libyan soil but claims to have launched over 4,000 air strikes since the beginning of attacks on Libya, all of which were "meant to protect civilians from Gadhafi's regime."

Nonetheless, everything suggests that the main aim of the international coalition in the last six months has been to overthrow a regime which is still defiant in its last strongholds.

Opinion: Germany will not lose out in race for Libyan spoils

The Gadhafi era is over and now world leaders are trying to win favor with the new Libya. Although Berlin was not part of the NATO mission, Deutsche Welle's Daniel Scheschkewitz says Germany has a future in Tripoli. (15.09.2011)

The heads of France and Britain, leaders of the NATO bombing campaign to oust Moammar Gadhafi from power in Libya, have visited the country to meet with representatives of the rebel-led government they helped install. (15.09.2011)